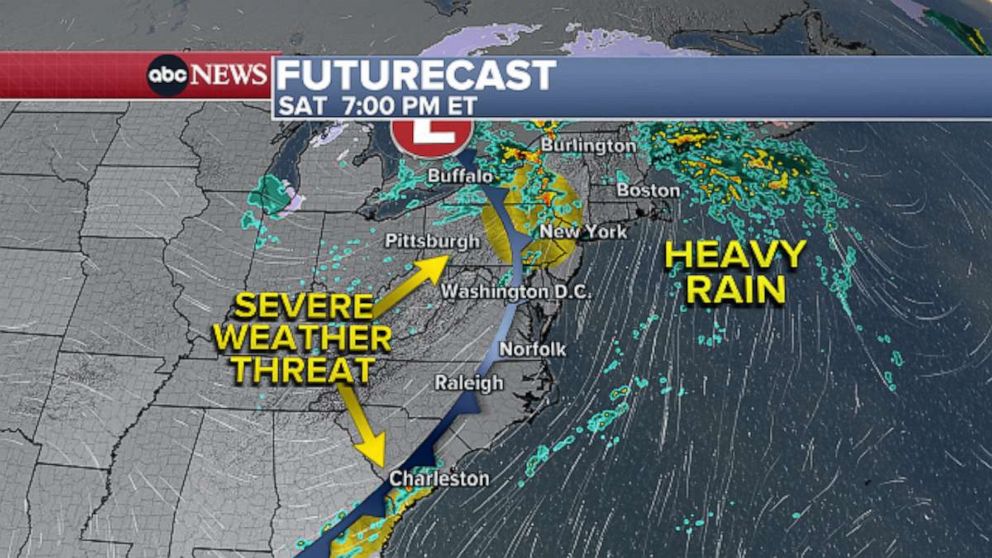 (NEW YORK) – Twenty million people are on alert along the East Coast for a large storm system that is expected to bring the threat of severe thunderstorms and possible tornadoes to parts of the region on Saturday.

Strong and scattered thunderstorms are expected to develop in the afternoon and evening ahead in parts of the northeast and along parts of the southeast coast.

The threat of severe weather is expected to end later Saturday evening, with the system expected to leave the east coast overnight and early Sunday.

Another major storm system is currently moving west bringing heavy rain and mountain snow. Winter weather advisories are in effect from the Cascades in western Washington and Oregon to the northern Sierra Nevada in northern California. Travel through some mountain passes could be impacted this weekend.

Strong, gusty winds potentially reaching over 60 mph in some places are another concern this weekend. Wind warnings were issued for Sunday stretching from Los Angeles and Ventura counties in southern California to Las Vegas and into Idaho.

This storm system is expected to bring a significant and severe weather threat to parts of the south early next week.

The widespread storm is expected to unfold early next week in parts of the south, primarily parts of Texas and Louisiana on Monday, then move east into Mississippi and Alabama on Tuesday.

Tornadoes, large hail and damaging gusts could all occur. Numerous severe thunderstorms could also have significant impacts on parts of the region.

Among several active wildfires in Texas is the huge Eastland Complex, made up of four separate fires in central Texas. The lethal and destructive complex burned 45,383 acres and was 15% contained by Saturday morning.

Firefighters were hampered by the wind. They will see improved weather conditions on Saturday, before the return of another round of strong winds and critical fire weather on Sunday.