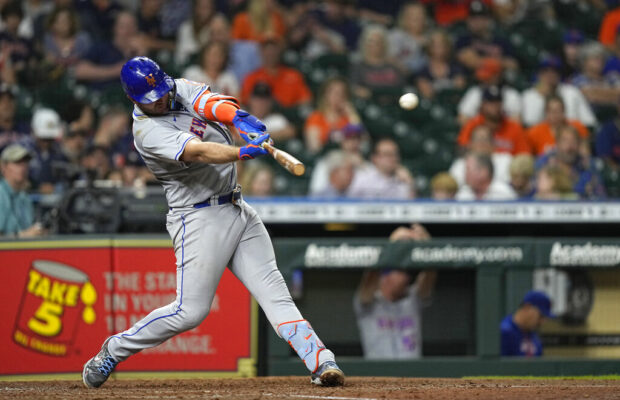 ATLANTA (AP) — Mets slugger Pete Alonso will try to become the first player to win the All-Star Home Run Derby three straight against a field that will include Albert Pujols of the Cardinals, Ronald Acuña Jr. of the Braves and Juan of Washington . In a way to.
The New York first baseman said Monday he was one of eight participants in the July 18 competition at Dodger Stadium in Los Angeles.
“It’s a really fun event, and it’s going to be super exciting,” Alonso said before the Mets play in Atlanta on Monday night. “I have a really good plan to go and, again, I’m having so much fun. I don’t think anyone is having more fun than me, especially when it comes to this event.
Dave Jauss, who was the bench coach for the Mets and is now a special assistant for the Washington Nationals, will pitch to Alonso for the second consecutive Derby.
“You just give him about two pots of coffee for before and a case of Bud Lite for after, and he said he was good to go,” Alonso said.
Alonso hit 74 total home runs in last year’s Derby at Coors Field in Denver and beat Baltimore’s Trey Mancini 23-22 in the final round. Alonso joined Ken Griffey Jr. (1998-99) and Yoenis Céspedes (2013-14) to win back-to-back titles. Griffey also won in 1994 and is the only three-time champion.
Pujols will enter his fifth Derby after failing in 2003, 2007, 2009 and 2015. He and Detroit’s Miguel Cabrera were added to the All-Star rosters as special selections by commissioner Rob Manfred.
Pujols will make his 11th All-Star appearance and compete in the Derby at one of his former homes. He played 85 games with the Dodgers last season after being eliminated by the Los Angeles Angels, then signed with St. Louis ahead of this season, which he says will be his last.
Pujols, 42, has five homers this season and 684 in his career, fifth on the career list.
“It’s an honor to be back in the All-Star Game and to have the chance to be part of the Home Run Derby, it’s something I really enjoy and my kids are going to have a blast,” Pujols said Monday evening. “Hopefully I can put on a good show for them because at the end of the day it’s not about us, it’s about putting on a good show for the fans.”
Acuña, the Atlanta star who will be a starting outfielder for the National League, will compete in his second Home Run Derby. Acuña was knocked out by Alonso in 2019, when he set a career high with 41 home runs.
Acuña will participate in the Derby even though he is not one of seven Atlanta players with 10 or more homers.
Acuña is hitting .274 with eight homers. He missed 19 games at the start of the season as he continued his recovery from reconstructive surgery on his right knee.
Acuña was the NL leader in All-Star voting.
Soto will be in the Derby for the second consecutive year. He hit the longest home run in last year’s competition at 520ft – the longest Derby run in the Statcast era. He beat Shohei Ohtani 31-28 after two first-round tiebreakers, then lost to Alonso 16-15 in the second round.
Soto is hitting .243 with 17 home runs this season.
Joey Gallo, Matt Olson, Salvador Pérez and Trevor Story also competed last year.
There was no Derby in 2020, when the All-Star Game scheduled at Dodger Stadium was canceled due to the coronavirus pandemic.
Alonso won the 2019 Cleveland Derby as a rookie beating Vladimir Guerrero Jr. in the final round, also by 23-22. Guerrero, whose father won the event in 2007, hit 91 total homers but tired in the final round.
___
More AP MLB: https://apnews.com/MLB and https://twitter.com/AP_Sports