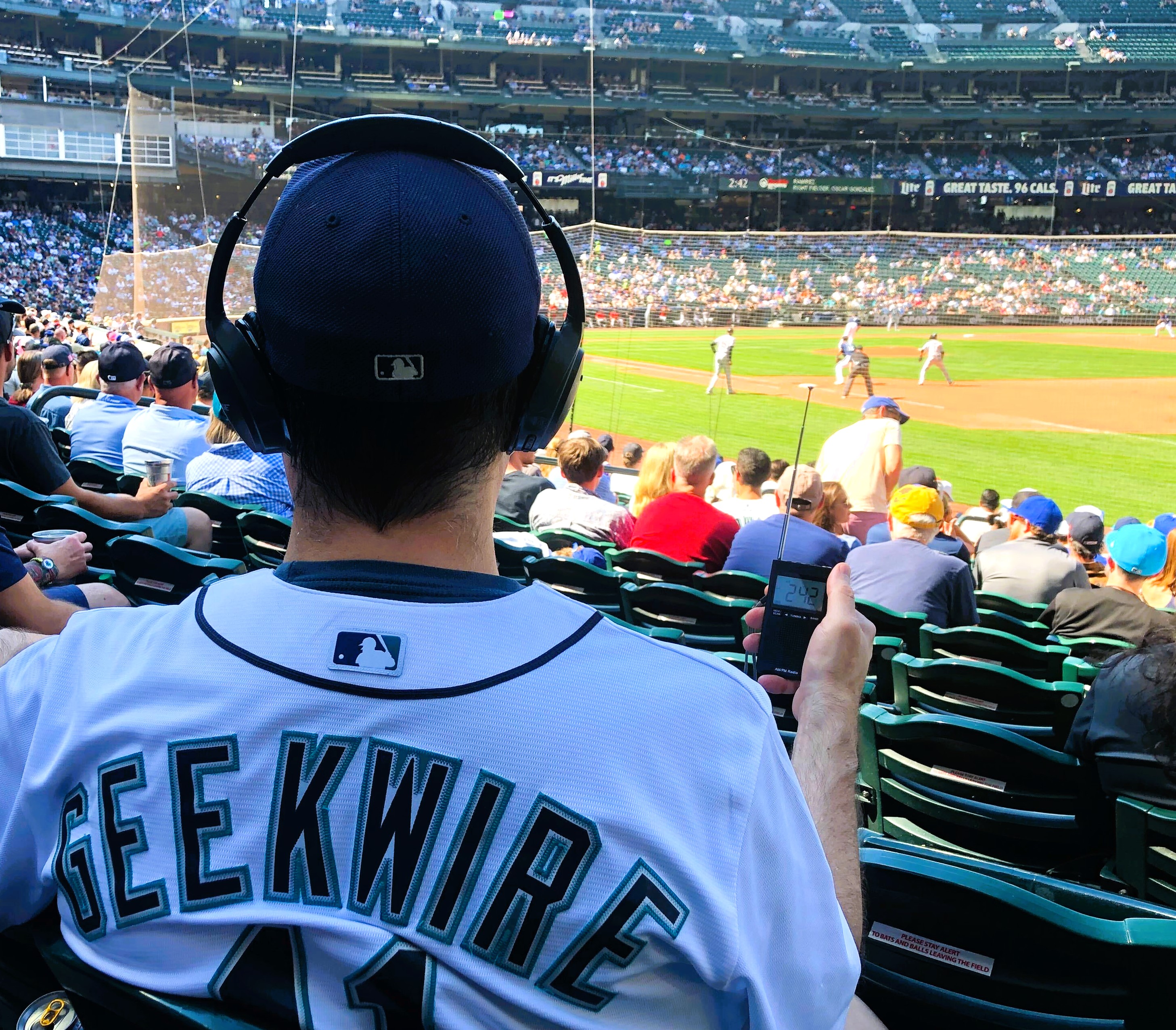 AM radio vs. digital audio; robot referees; and Amazon cuts the line – GeekWire

Sitting in the first base line bleachers Thursday at T-Mobile Park in Seattle, I felt like a true fan, in my white Mariners jersey with GEEKWIRE on the back, Louisville Slugger baseball glove, Mariners spring circa 2007, white Felix Hernandez socks and noise-canceling headphones attached by cord to my portable AM-FM radio, perched between the seats in front of me for optimum reception.

It was then that the guy a few seats to my left turned to me and made a humiliating observation… he wondered if I was cosplaying as Steve Bartman.

You may remember Bartman as an unhappy Cubs fan with the hat and headphones in the 2003 National League Championship Series, who deflected a ball that might otherwise have been caught by the Cubs outfielder. Moises Alou. If you’ve seen the video or a photo or watched the documentary, you’ll have an idea of ​​what I looked like.

But it wasn’t cosplay. It was a technical test.

In this episode of the GeekWire Podcast, we pit old-school terrestrial radio against state-of-the-art digital audio streaming for play-by-play in the stands. Next, we discuss the pros and cons of baseball analytics and robot umpires. And finally, we get to see the highs and lows of Amazon’s latest retail tech at the tech giant’s hometown stadium.

Listen above and keep reading for more.

Radio vs smartphone: I love baseball, but I’m a big fan of multi-sensory experiences, especially seeing something live and simultaneously having someone talking in your ears, pointing out things you might otherwise miss.

In a modern baseball game, there’s so much going on in the stands, on the scoreboard, and among the people around you that it’s easy to lose track of what’s happening on the field.

Longtime baseball fans know the solution: bring a transistor radio to the game, perhaps with headphones, and follow along with the help of the play-by-play announcer and color commentator in the booth.

These days, there are several apps that provide the ability to stream game audio to your smartphone. In an ideal world, the experience of listening to the game via your phone in the stands would be perfectly synchronized.

But in reality, anyone streaming audio from the MLB app, TuneIn, or the 710 Seattle Sports radio app wouldn’t hear a home run call or any other play-by-play in their ears until at least 30 seconds after this happens. the field, given a significant delay in the audio stream.

This annoyed me for a while. My ideal scenario would be going to the game with a family member or buddy who also wanted the play-by-play to happen. Sitting next to each other, we could each have an Airpod in one ear, listening to the live stream from our phones, and chatting between locations, almost like we were sitting on the couch together, except the game would be live in real life in front of us.

But the delay makes the term “live stream” misleading and makes this scenario laughable. Testing it during Thursday’s game, my phone’s stream was usually about two casts behind the live action, at least.

I had a similar experience the last time I tried this at the ballpark a few years ago, so this time I was ready. I brought an AM FM portable digital transistor radio, bought the day before from Amazon for $21.99.

Sure enough, a good old-fashioned terrestrial radio saved the day. There was a slight delay, but only a few seconds, between the action on the pitch and the AM broadcast reaching my ears.

It was certainly doable and an interesting example of old technology beating new.

I have a few theories as to why the difference – including network latency, additional advertising in the live stream, or possibly an MLB policy or media rights issue – but couldn’t get to response in time for this episode. I’ll see if I can find out, and please let me know your thoughts and theories at [email protected]

In the meantime, I’ll be perfecting my Steve Bartman cosplay in the stands. Anyone who enjoys listening to play-by-play while watching a live game is fine with me.

Tech at the ballpark: In the second segment, my colleague John Cook and I discuss and debate ways to make the game faster, the potential for augmented reality in the stands, the pros and cons of replacing referees with robots, and surprising apprehensions of John about T-Mobile Park’s retractable system. roof.

Amazon One and “Just Walk Out” at play: Of course, one of the worst parts of going to any professional sports game is standing in line for a drink or snack and missing a crucial game on the field.

But it’s one of the places Amazon is offering its Just Walk Out technology, in a take-out food and beverage store called “Walk-Off Market,” which opened in T-Mobile Park earlier this year near section 126 behind plate at home.

You can enter by swiping a credit card or scanning your palm if you are already registered on the Amazon One system. Overhead cameras and sensors follow you around the store to see what you’re picking up and taking, and automatically top up your card.

Since I had already registered my palm and credit card with Amazon One in the Amazon Go store at the company headquarters in 2020, I was able to enter the store in T-Mobile Park simply by passing my palm above the sensor and the tipped open door. I headed straight for the large refrigerators out back…but was stopped by a worker who asked to see my ID.

I understand there are liquor laws that govern this but if I have to give Amazon my biometrics it would be great if the system could know that I am well over 21 and allow me a way or another to pass in the beer section without having to show my ID. Consider guest reviews for Day One Tower folks.

Anyway, after considering the large selection of beers, I made my selection and grabbed a Mariner Dog in the hot case. Before going out, I opened my beer can as instructed by another worker – they don’t want fans to be able to use an unopened beer can as a projectile from the stand. Even with that, and getting a patent, the whole experience lasted about two minutes. It could easily have been less than a minute if I had spent less time selecting the beer.

My colleagues Kurt Schlosser and Taylor Soper put together a full video and story at the opening of the “Walk-Off Market”.

But I have an important postscript to add about this hot dog, which Taylor and I discussed when we were back in the stands Thursday afternoon. The hot dog was lukewarm and the bun was stale. As Taylor observed, I had encountered one of the downsides of the takeout service.

OK, podcast fans, this is the ball game. Thank you for listening (and reading).

Listen above or subscribe to GeekWire in Apple Podcasts, Google Podcasts, Spotify or wherever you listen.