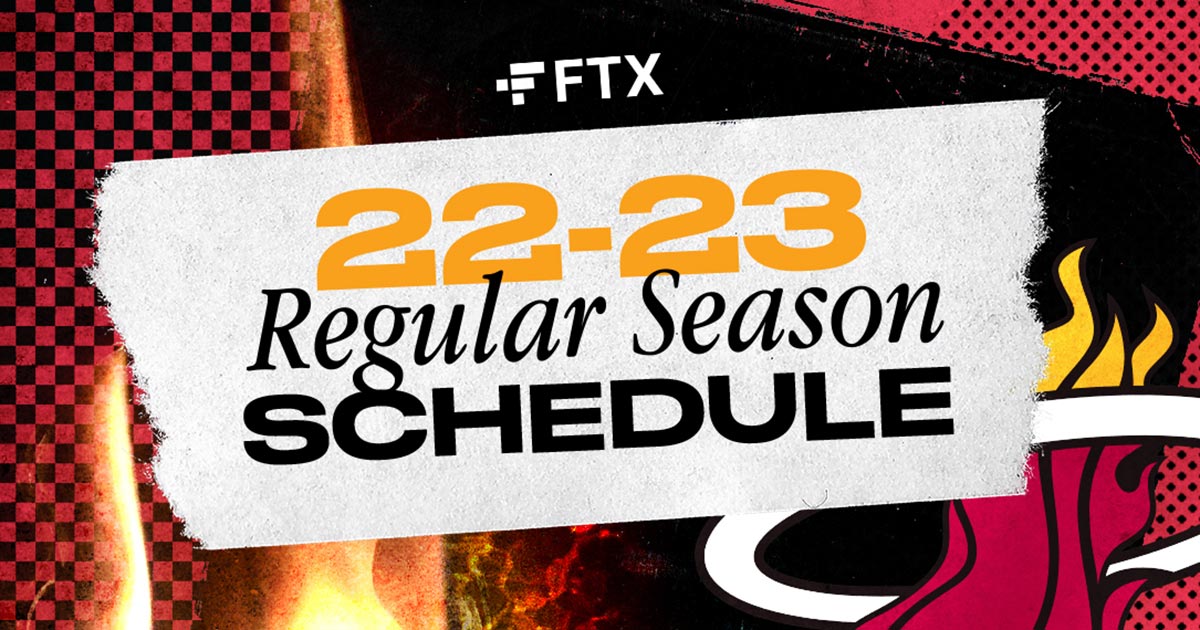 Your Miami HEAT today announced its full 2022-23 season schedule which will begin with five preseason games and feature 82 regular season contests from October 4, 2022 through April 9, 2023. Bally Sports Sun, the regional television partner exclusive to the Miami HEAT, will air all preseason games and 77 regular season games. The HEAT will make 22 national television appearances, including six on ESPN, four on TNT and one on ABC as well as 11 on NBA TV. The Miami HEAT Radio Network, led by its new flagship station AM 560 Sports WQAM (AM 560/FM 99.9 HD2), will broadcast all team games in English with select games on 790 The Ticket (AM 790/FM 104.3 HD2) when scheduling conflicts arise. In addition, the Miami HEAT Spanish Radio Network will broadcast every home preseason game and every regular season game in Spanish on its flagship station, Univision Radio’s Radio Mambi (710 AM/FM 107.5 HD-2 and simulcast on 1140 AM WQBA).

Miami will begin the 2022-23 campaign inside the FTX Arena on Oct. 4 in a preseason game against the Minnesota Timberwolves before a back-to-back road trip against the Brooklyn Nets on Oct. 6 and the Memphis Grizzlies on Oct. 7. go home for the final two games of the preseason, first against the Houston Rockets on October 10, then against the New Orleans Pelicans on October 12.

The HEAT will kick off its 35th regular season with a four-game homestand inside FTX Arena, kicking things off against the Chicago Bulls on Wednesday, Oct. 19 (7:30 p.m.), followed by a Conference Finals rematch. East televised on Friday night against Boston on October 21 (7:30 p.m.) before facing Toronto in back-to-back matches, first on Saturday, October 22 (8 p.m.) and again on Monday, October 24 (7:30 p.m.). Miami will then embark on its first road trip of the season with a three-game West Coast swing against Portland, Golden State and Sacramento. The HEAT will play 10 of its first 14 games in Miami before being on the road for eight of its next 10. The schedule is also highlighted by visits from the defending NBA champion Golden State Warriors on November 1, the Lakers on December 28 and consecutive. Milwaukee Bucks appearances on Jan. 12 and a nationally televised ABC game on Saturday, Jan. 14 (1 p.m.).

This year’s program includes 37 of the 82 matches played over the weekend (Friday to Sunday). Of these weekend games, 17 will be played in Miami (seven on Friday, seven on Saturday and three on Sunday). HEAT’s longest homestand will be a six-game streak from March 1-10, which includes 10 games inside FTX Arena in March, the most for any month. Miami will play 14 consecutive games and face the same opponent eight times in consecutive games. Additionally, the HEAT will play their road contest on December 17 against the Spurs in Mexico City, marking Miami’s second trip to Mexico City after previously recording a 101-89 win over Brooklyn on December 9, 2017.

A limited number of Miami HEAT mid-season ticket plans are available for sale for the upcoming 2022-23 season. Fans can contact HEAT by emailing [email protected] or calling 786-777-HOOP. Beginning Monday, August 22, the general public can purchase game tickets by logging on to HEAT.com/tickets/single-game-tickets beginning at 12 p.m. There will be a limit of eight tickets per household per game. All Miami HEAT home games are mobile-only. HEAT fans can secure access to purchase tickets before the general public by registering via https://heat.com/presaleaccess.

As podcasts democratize communication, brands need to be receivers as well as senders