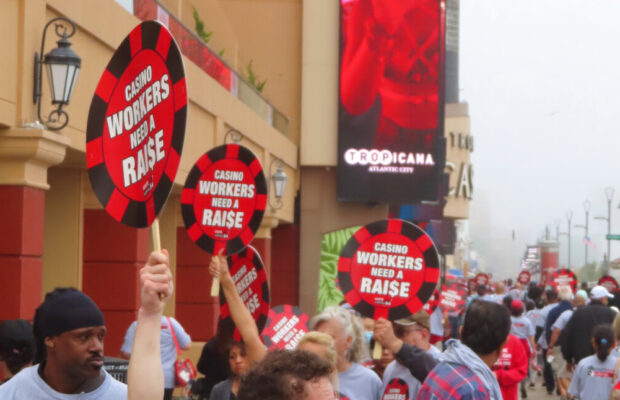 By WAYNE PARRY Associated Press
ATLANTIC CITY, NJ (AP) — Atlantic City’s main casino workers union on Thursday reached new contract agreements with four casinos, providing what its president called “the best deal we’ve ever had” and a labor peace that will avert a strike over the July 4 weekend, one of the busiest casinos of the year.
Unite Here Local 54 has reached tentative agreements with the Borgata, which is owned by MGM Resorts International, and three Caesars Entertainment casinos: Caesars, Harrah’s and Tropicana.
There is still a deadline for a Sunday strike against Hard Rock Casino, but the new pacts appear to greatly increase the likelihood that a deal will also be reached with Hard Rock.
“This is the best contract we’ve ever had,” union president Bob McDevitt told The Associated Press shortly after a deal was struck around 11 p.m. “We got everything we wanted and needed. The workers delivered a contract they can be proud of for years to come.
The workers, too, were delighted with the agreement.
“I’m super excited,” said Ronnette Lark, housekeeper at Harrah’s. “I’ve been here for 24 years and we’ve never gotten such a raise. We got big raises.
The union did not disclose the terms of the settlement, saying they must be presented to all union members and ratified before taking effect. But he said he was looking for “meaningful” increases to help employees keep pace with rising costs.
Representatives for the four casinos did not immediately respond to requests for comment on the deals.
The settlements come at a crucial time for Atlantic City and its casino industry, which is struggling to recover from losses caused by the pandemic and exacerbated by inflation and a labor shortage.
Yet these same factors were the driving force behind the union seeking a much larger increase than in previous years; the exact amount has not been made public. In past contracts, the union has focused on preserving health care and pension benefits, but this time it demanded what it said were ‘meaningful’ increases for workers to help them. keep pace with soaring prices for gas, food, rent and other living expenses.
The agreements averted what would have been the city’s first casino strike since 2016, when the union rejected billionaire Carl Icahn’s demands that the Trump Taj Mahal casino operate without health care or pension benefits, which have been terminated by a bankruptcy court.
The union went on strike on July 1 and the casino closed on October 10. It was sold months later to Hard Rock International, who gutted it and reopened it as the new Hard Rock Atlantic City in June 2018.
The finances underlying the current dispute are complex.
Including revenue from internet gambling and sports betting, casinos and their online partners earned $1.8 billion in the first five months of this year. That’s an increase of more than 49% from the same period in 2019, before the coronavirus hit.
But casinos say these numbers are misleading, as third-party partners keep around 70% of sports and internet betting revenue, leaving brick-and-mortar casinos little.
They say a more accurate measure is the money won by players in person. According to this metric, casinos only won 5% more than in-person gamblers in the first five months of 2019. Only three casinos – Borgata, Hard Rock and Ocean – won more from in-person gamblers during this period. . Frame.
___
Follow Wayne Parry on Twitter at www.twitter.com/WayneParryAC

Marco Werman, host of ‘The World’ on public radio, will begin broadcasting from UC San Diego