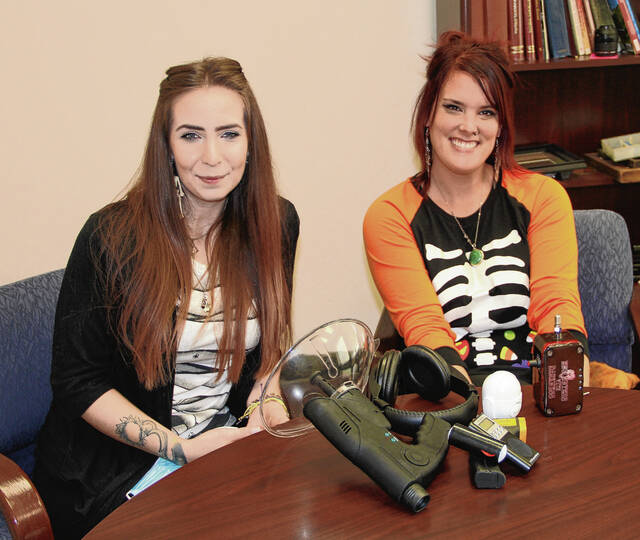 When a psychological horror writer and a dark fantasy writer team up to investigate the paranormal, what do you get? “Encounters with darkness.”

“Encounters with Darkness” originally started out as a podcast and vodcast where Seymour resident Ashley Greathouse shared personal encounters that inspired her to write books. A podcast is a series of spoken word, audio episodes, all focused on a particular topic or theme, and a vodcast is a video podcast.

“Then I started diving into haunted Indiana and talking about all these different places that we have here,” Greathouse said. “Then I wanted to go out and investigate those places and that’s when it became so much more than ever. “

About a year and a half ago, Melissa Slate-Bindschadler, also from Seymour, came on board and the duo began to visit these haunted places.

The two became friends when they worked together for a short time at Woodforest National Bank at the Seymour Walmart Supercenter and found they had a lot in common.

Greathouse, 33, is a graduate of Brownstown Central High School and is currently a home health aide. She was previously the scheduling coordinator, but resigned to have a little more time to write. She also enjoys helping people in her helping position.

She has written several books which she describes as psychological horror and her latest is “It Hatched on Easter”.

Bindschadler, 31, graduated from Connersville High School and has lived in Seymour for nine years. She is employed at Emerson Elementary School as a teaching assistant and is married to Joe Bindschadler. The couple have a daughter named Harlow.

Melissa has written and published two dark fantasy books, “Mais. It was October “and” Fallen September, “which is the sequel to the first book.

Greathouse and Bindschadler’s books are available at amazon.com and through The Magic of Books at bookshop.org/shop/TMOBBookstore.

The two friends said they plan to write more books individually and have raised the possibility of co-writing a book based on their investigations.

“One of our most recent adventures was Monday night in the Jackson-Washington State Forest in Brownstown,” said Greathouse. “We haven’t seen our footage yet, but we definitely got away.”

They think they filmed something and saw it with their own eyes, which had not happened before, Bindschadler said.

“Most of our stuff that we don’t see as it happens, we see it from the footage we edit,” she said. “This is the first time we’ve looked at something on our night vision camera as this happens.”

Greathouse has an app on her phone that works as an electromagnetic field detector (EMF) and mind box, which displays the words instead of a person having to listen to the words.

“So we were in my car and there was an orb – clear as day – and it got into his phone and his phone started beeping, which we can’t explain,” Bindschadler said. “It’s the first time we’ve seen it like this has happened.

Greathouse said they also attended Carr High School, also known as Weddleville High School, near Medora. Built in 1857, it predates the Civil War and is the oldest school still standing in Indiana.

“We were the first paranormal investigation team to gain access to the building,” she said. “We have been kicked out and this is one of the places we will definitely not go back to after 9pm. We will go there and visit the museum once it opens and we will go there to pay our respects to everyone who is in the cemetery that is on the property, but not at night. ”

Bindschadler said the man who owns the building did not tell them what was seen and heard in the school prior to their visit because he did not want to put those thoughts in their heads.

“When we told him what we had been through, he said he wanted to see if we had experienced the same things he and his workers had felt there,” she said. “The workers won’t stay there after 9 am either. It was a different energy.

Greathouse said that of all the places they’ve visited and investigated in Indiana, the most frightening encounters they’ve had have been with real people.

“It’s just the two of us who go to these places and there have been times when we’ve been kicked out of places by real people, when we’ve encountered things that we shouldn’t,” Bindschadler said.

The two women have equipment that they take with them for their investigations. Some of these items include a bionic ear, which picks up sounds that are not normally heard by the ear; a heat gun to monitor temperature drops; an EMF detector, which detects the fields emitted by the movement of electrically charged objects; a spirits box to scan AM and FM radio frequencies and basically purify the air so that spirits can come through and send a message; and a very noisy motion detector.

They even made some of their own equipment (with their logo on the side) that picks up electromagnetic frequencies. Something they use during every survey is the Necrophonic app, which can act as a mind box, on the cell phone. The app ties into all of the high tech apps that are already in the phone, Greathouse said.

Anyone interested in having the Encounters with Darkness team conduct a paranormal investigation can contact them on any social media platform and they will determine whether or not this is something they want. undertake.

“We’re only here to observe and capture evidence, so we’re not making spirits disappear,” Greathouse said. “We’re here to validate if anyone wants to know if a place is haunted or not.”

She said they use humor as a coping mechanism during their investigations and make jokes all the time when they’re scared, which is why they laugh a lot in their videos.

“We love Halloween and we both decorate our homes,” Greathouse said. “We’re planning to dress up and take Melissa’s daughter for a sleight of hand.” We are still in the childhood spirit of Halloween.