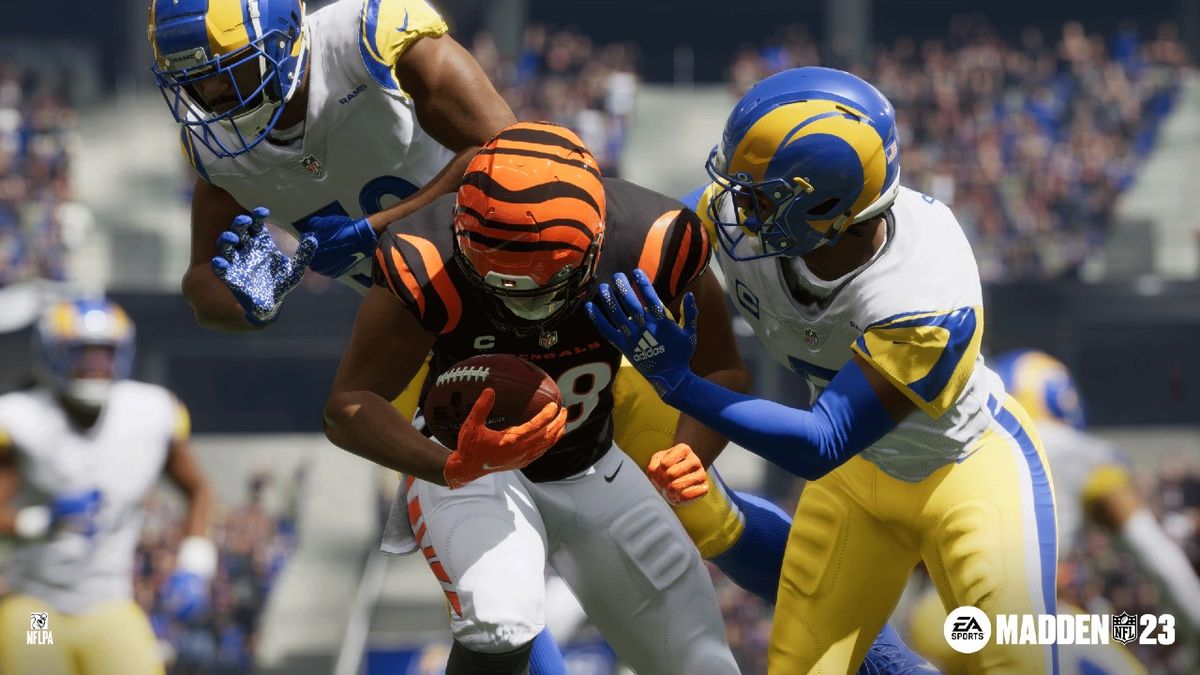 Madden 23 hands-on preview: Admittedly progressive, but is it really ‘new’?

EA is no stranger to game announcements that get divisive reactions. The community’s response to the Madden 23 reveal was particularly fierce, however. Its big “new” feature, as discussed with senior producer Mike Mahar in our Madden 23 preview, is called FieldSense – and some longtime fans claim it’s just a collection of mechanics removed from the game. over the past years and now reconditioned for new- gen. Featuring Coach himself on the cover after his death late last year only heightened the “don’t do it like before” vibe.

After spending the last week pounding the Madden 23 beta on PS5, there’s some substance to the gripes. After interviewing Mahar, I expected it to feel like an entirely different game than Madden 22. Obviously, it doesn’t. FieldSense doesn’t evoke memories of the series’ halcyon days on Mega Drive or PS2, nor does it feel like a true fresh start. Many animations, comment lines, and other minor shortcomings carry over from last year.

And yes, some of these “new” additions are indeed things we’ve seen before. For example, one of the best pieces of defense is bringing in teammates to help you stop a rushing opponent or complete a tackle once you’ve unbalanced a runner. It is extremely useful in short distance situations or on the goal line. It was not in Madden 22, and in this sense offers an upgrade. But physics-based gang tackles were part of the series and worked similarly in Madden 16, so you understand that collective look to some extent.

The wide receiver and defensive back fights are specified as another new wrinkle. It’s true that there’s more sense to a press that happens when the ball is broken, the DB slowing the WR down a step or two, or said receiver avoiding his man to escape into space. Yet Madden 18 attempted a similar thing. Receivers had four different types of release mechanics, while cornerbacks could funnel opponents down the line by pushing a direction on the right stick. So while it looks “new”, it technically isn’t, in the context of the whole series.

All power to the community, then, for wanting transparency in the marketing of the game. But the problem, as with most social media discussions, is that there is depressing common ground. On this evidence, Madden 23 will struggle to score 9s and 10s. But it’s also much better than the 1s and 2s that will be lumped together on Metacritic in protest. Madden 23 won’t rival classic series entries like Madden 2005, with its engrossing franchise mode and ever-revered Tony Bruno radio show. Yet he is still playing solid football, with small but noticeable improvements.

For example, the racing game offers a substantial upgrade over Madden 22. It finally feels subtle and complex, and more than just speed or power. Mahar has talked a lot about 360 degree cuts and immediate weight transfer, and the difference is tangible. You can slow your run, Le’Veon Bell style, then shoot through a gap when it opens. You can sprint right on a throwing route, spot a lineman shooting at their defender, and back into surprise space. You can patiently wait for the block to develop on a punt return, then weave between two cover players and hit the open field. Finally.

The other side of the coin is that defending the race is more difficult than a year ago. In fact, I’m happy about it. Too often in Madden 22 you could stop an opponent’s run game by charging down the line or bombing a safety or CB. Now it’s all too easy to over-commit to one side of the pitch or chase too much with an individual player. This lessens your aggressiveness and forces you to think a bit more when selecting games.

The quarterback game is also changed. However, the new aiming reticle and ability to aim receivers aren’t as pronounced as the FieldSense reveal made them appear. This area looks like Madden 22 Enhanced. Where it’s really noticeable is leading a possession receiver down an out road for a tiptoe touchdown, or a downhill speedster for a deep heave. Ideal if you control the Rams, with Cooper Kupp, or the Miami Dolphins and Tyreek Hill. (Tua Tagovailoa may not have the biggest arm, but Hill remains a cheater when left in single coverage.) For average QB-WR tandems, it looks a lot like it was a while ago. a year.

Special teams shortcomings are also familiar. Aside from the improvements to kicking and clearing returns, brought about by the intricacies of foot planting and better blocking, this is largely a non-event. There is no sense of danger whether you have a blocked punt or miss a field goal from within 45 yards. Likewise, there are no punt call points or field goal blocks, as AI teammates never get close. As always, you can try jumping yourself, and maybe in online matches that’s the only way to keep things skill-based. But offline, your AI gunners should be able to reach out and flip the ball every so often.

Presentation is one area that’s still good, when it really could be great. I love the new close-up cameras celebrating a touchdown, and helmetless coaches and players look brilliantly realistic. But stat overlays and other broadcast elements still make it impossible to watch a Sunday night tilt on CBS or Fox. EA’s deal with the FIFA Premier League shows how a video game can achieve authenticity on this front. It’s, well, infuriating that Tiburon didn’t consider a crossover like 2K’s mid-2000s tie-in with ESPN, complete with realistic branding, halftime shows, and the like.

Constructive criticism aside, I’m having fun with Madden 23, especially its refreshed ground game. The franchise has stalled lately in the wake of the rise of Ultimate Team, and I’d really like something to stick with on that front – but right now the Madden 23 beta PS5 only offers exhibition matches. We’ll be looking at these modes closer to Madden 23’s August 19 release date. As for FieldSense: for now, mark it as “transitional”, rather than “transformational”.