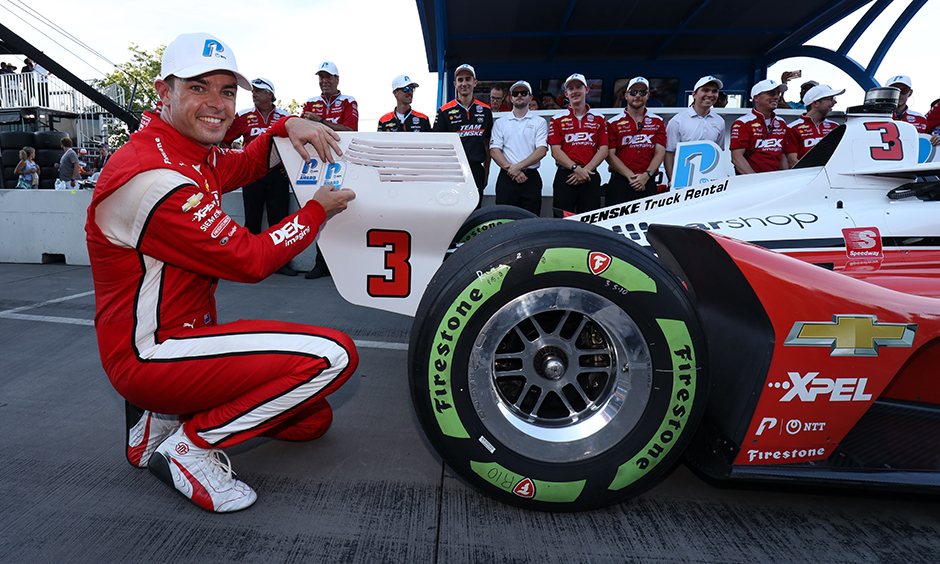 McLaughlin’s fastest lap was 1 minute, 14.5555 seconds in the No. 3 DEX Imaging Team Penske Chevrolet on the temporary 11-turn, 2.1-mile street circuit that includes two trips per lap over the Memorial Bridge of Korean War veterans. Pole came after New Zealand driver McLaughlin led practice earlier in the day in 1:15.4609.

“The car was phenomenal,” McLaughlin said. “We did that on one lap, using the tires. One of those good laps.

The start of qualifying was delayed 90 minutes due to thunderstorms and lightning that rumbled through downtown Nashville this afternoon. The rain changed the level of grip on the tricky and bumpy street circuit.

2021 NTT INDYCAR SERIES Rookie of the Year McLaughlin’s previous pole came in February at the season-opening Firestone Grand Prix of St. Petersburg, which he won from first place for his first career victory in series. He also won the Honda Indy 200 at Mid-Ohio presented by the all-new 2023 Civic Type R in early July from the second starting spot.

“I’ll tell ya, that DEX car is really good, man,” McLaughlin said. “We drive very fast in this car. Won St. Pete’s first game with. We won Mid-Ohio and now we have pole position in Nashville, which is an incredible circuit.

Romain Grosjean will join McLaughlin on the front row for Sunday’s race after his fastest lap of 1:14.6975 in the no28 DHL Honda. It was the best qualifying effort of the season for the Frenchman, whose previous best start was fifth in the season opener in St Petersburg.

Rookie Christian Lundgaard continued his impressive weekend by qualifying a career-best third at 1:14.7149 in the #30 Honda Shield Cleansers. The Dane’s previous best start was fourth last August in the road race at Indianapolis Motor Speedway.

Lundgaard, who led practice on Friday, came to Nashville after notching a career-best second-place finish last Saturday in the Gallagher Grand Prix at the IMS road course.

Joining Lundgaard in row 2 is defending series champion Alex Palou, who qualified fourth at 1:14.9087 in the No. 10 NTT DATA Chip Ganassi Racing Honda.

Pato O’Ward qualified fifth in 1:14.9261 in the #5 Chevrolet Arrow McLaren SP. Josef Newgarden, a two-time series champion and Nashville-area native, finished the Firestone Fast Six in 1:15.1461 at the No. 2 PPG Penske Chevrolet team.

Newgarden made an interesting bet that didn’t pay off. He was the only Firestone Fast Six rider to qualify on primary Firestone tires. The other five riders used Firestone alternate tires, which this weekend are constructed with rubber derived from the drought-tolerant guayule shrub native to the American Southwest. The main tire lasts longer but is not as grippy as the alternate tire.

Still, Newgarden, O’Ward and Palou are the trio in the series’ top-six standings who will start the treacherous street race from the front three rows. Points leader Will Power, the 2022 Indianapolis 500 presented by Gainbridge winner Marcus Ericsson and six-time series champion Scott Dixon weren’t so lucky.

Power, who leads Ericsson by nine points with four races remaining, will start eighth in the No. 12 Verizon Team Penske Chevrolet. He lost his fastest lap of the second qualifying lap, which would have advanced him into the Firestone Fast Six, when he was penalized for causing a local yellow which affected O’Ward’s last lap at the end of this session. Power ran long in a trickle area.

“It’s always tough in qualifying with track position and penalties and getting caught by the reds (flags),” Power said. “That’s how it is. It’s hard.”

Chip Ganassi Racing teammates Dixon and Ericsson did not make it out of the first qualifying round. Dixon will start 14th in PNC Bank Chip Ganassi Racing’s No. 9 Honda as it continues its record seventh season championship.

Ericsson will start 18th in the 26-car field in the #8 Huski Chocolate Chip Ganassi Racing Honda. But he can take comfort knowing that he won the inaugural race at this circuit last year from the same starting point.

“We have to find a good strategy and play the race as it comes,” said Ericsson. “There were a lot of incidents this weekend, again like last year. I think there will still be opportunities. We’re just a little too lacking in speed right now.