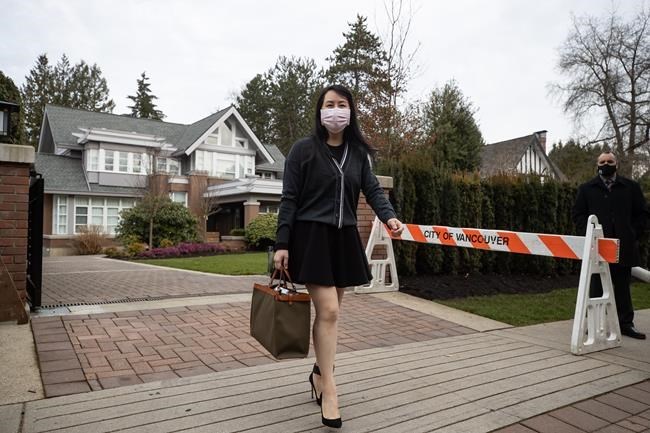 VANCOUVER — A lawyer for Huawei’s chief financial officer says there’s no evidence international bank HSBC suffered an increased risk of loan loss as a result of Meng Wanzhou’s alleged actions. Frank Addario made the comment as he asked a BC

Frank Addario made the comment when asking a BC Supreme Court judge to admit new evidence in Meng’s extradition case.

“There was never a risk that the bank would suffer a loss,” Addario said, before receiving a denial from the judge and a lawyer for the Attorney General of Canada.

Meng was arrested at Vancouver airport in 2018 at the request of the United States to face fraud charges which she and Huawei deny.

She is accused of misrepresenting Huawei’s control of tech company Skycom during a presentation to HSBC in 2013, putting the bank at risk of violating US sanctions on Iran.

On Monday, the British Columbia Supreme Court began the second hearing in seven weeks in the Meng case, which ends in a real extradition or committal hearing in May.

The evidence his team wants to present is an affidavit from an accountant that details credit facilities and loans made between 2013 and 2017.

Court documents from Meng’s team outlining the proposed evidence indicate that HSBC executed the first loan a week before Meng’s presentation, so they argue the bank could not have been swayed by this. The next two loans were made to Huawei affiliates, and its lawyers say that suggests they were too far removed from the risks of sanctions violations.

HSBC was not a lender in the final syndicated loan.

Associate Chief Justice Heather Holmes challenged Addario’s assessment of why the loans were mentioned by the United States on the record of the case in the first place.

The United States appears to rely on a casual link that is “broadly framed” rather than alleging that a particular loan was sought based on a particular representation that turned out to be false, putting this loan at risk, Holmes said.

Addario replied that he did not believe the details of how the loans might be at risk had been “worked out”.

Holmes also suggested that fraud law recognize the risk inherent in any loan, even when it is repaid.

A lawyer representing the Attorney General of Canada called the proposed evidence “irrelevant” and urged the judge to reject it.

Robert Frater argued that the evidence shows the bank did not lose money on the loans, but does not speak of risk.

“The evidence that I would submit is capable of showing that Huawei is not a bad payer and that the banks are doing very well,” Frater said.

“Do any of these facts help you resolve an issue that would be relevant to incarceration? We say they don’t.”

The fraud law arguments are expected to be argued at the extradition hearing, but excluding the proposed evidence would not weaken Meng’s case at this point anyway, Frater said.

Deprivation involves risk of economic loss and the requesting state does not have to prove actual loss, he said.

The “most alarming” part of Addario’s submission was that it was the last “planned” application to introduce new evidence, rather than the last application, period, he said.

“In our view, this has no merit, it’s time to move on to incarceration,” Frater said.

The court adjourned until Wednesday, when arguments will begin in a crucial stage of the case.

The conduct of Canadian police and border agents will come under intense scrutiny in court as Meng’s team begins to argue that her Charter rights were violated during her interrogation and arrest at Vancouver airport.

They allege that Meng was the victim of an abuse of process and that proceedings should be stayed, while officers testified that they acted appropriately.

This report from The Canadian Press was first published on March 15, 2021.