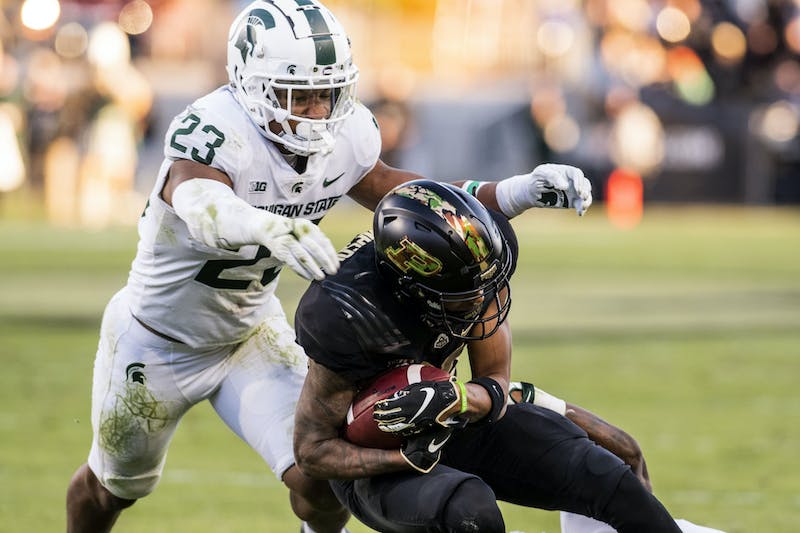 MSU Spring Game: How to watch, what to expect and positions to watch on Saturday

Finally, time is starting to turn and it seems like it’s here to stay. In the Greater Lansing area, that means one thing: the Michigan State Spring Game.

Michigan State head coach Mel Tucker, redshirt junior quarterback Payton Thorne, redshirt senior wide receiver Jayden Reed and company are scheduled to take to the field at 2 p.m. Saturday at Spartan Stadium. for MSU’s annual spring game. This will be the second spring game before Tucker’s third season after a 2020 hiatus and a 2021 spring game limited to 6,000 fans.

This year the game is completely open, free to the public and surrounded by a lot more buzz than last spring. Tucker feels it too. And those eager to take a dose of the team can be in their seats from 12:30 p.m.

“I remember our first spring game in Georgia, we had 97,000 people there,” Tucker said. “And the fire marshal had to come and tell people they couldn’t come in. They stood in the aisles. So I would love to see that. I don’t see why not come to see a ball.

Those planning to attend are encouraged to bring books as part of a book drive to benefit the Lansing Public School District. A book donation also grants a raffle ticket with a chance to win a pair of free tickets when Michigan State hosts Ohio State next October.

And for those who can’t attend, MSU’s Spring Game will air on Big Ten Network and air on radio via the Spartan Media Network.

For what it’s worth, the “spring game” might be a little misleading. As last spring, there will be no scrum between the greens and the whites. Rather, Saturday will consist of a 15-period practice.

For some, this may be a disappointment with the style of play format under former head coach Mark Dantonio. The public got a glimpse of the intense and painstaking practice led by Tucker last spring. The speed and intensity of game day is Tucker’s expectation at each of MSU’s practices to emulate Saturdays in the fall and that won’t change for this weekend.

But if it were up to Tucker, it wouldn’t be like this. Injuries, especially to the offensive line, have hampered the Spartans all spring. It didn’t just affect the trenches either. Reps at all levels, such as running backs, have been reduced during team drills.

“I wish I could play a traditional game if we could,” Tucker said. “But our numbers won’t allow us to do that.”

Individual talent is always important on the offensive line, however, chemistry is just as, if not more, essential. The Spring Ball provides an opportunity to reinforce this. But as MSU progressed in the spring with sometimes as few as seven linemen available, it missed part of the opportunity.

“Normally you do your individual periods at the start, then you go to group periods, then you go to team,” Tucker said. “And so we had to mix up some of the group times between the team times throughout practice so that we could keep the O line fresh. We implemented TV timeouts during practices to give these guys a hard shot.

It’s unclear at this point who will and won’t be available on Saturday, but those who can try will be exposed. Younger players who wouldn’t normally get as many reps get more reps than usual and could turn the heads of the coaching staff.

Michigan State fans got their first glimpse of junior running back Kenneth Walker III last spring, the birth of a green and white star. Now the Spartans are tasked with replacing Player of the Year Walter Camp with a new running backs coach in Effrem Reed.

Redshirt rookie Davion Primm, who hasn’t seen playing action in 2021, has been the buzz of the spring, receiving praise from offensive coordinator Jay Johnson, Tucker and Reed.

“The thing that stands out the most about Davion is that his body has changed a lot so he’s able to endure a lot more, but the mental side of the game he understands a lot better,” Reed said Thursday. “He is able to slow down and he slows things down there on the pitch. So it is able to process a lot more and it plays faster and makes plays.

Wisconsin transfer running back Jalen Berger was felled in early spring, but seems to emerge late. The team held its second scrimmage of the spring last Thursday and Berger “made up some points” after not being complete for the first scrimmage. A four-star recruit in high school, Berger has the potential to be a hard-hitting player early in the season.

The Spartans are still awaiting the summer arrival of Colorado transfer Jarek Broussard, but still have a lot to do. In addition to Berger and Primm, MSU is returning junior Jordon Simmons, redshirt senior Harold Joiner, redshirt senior Elijah Collins and redshirt sophomore Donovan Eaglin — all players who received carries in 2021.

The core linebacker was one of the most stable groups when healthy, led by senior Quavaris Crouch and redshirt sophomore Cal Haladay. Both are back for 2022 and hope to build on the foundations they cemented last fall.

However, Crouch did not attend spring training and missed three games last year due to injury, revealing a lack of depth in defensive coordinator Scottie Hazelton’s two-linebacker plan. Hazelton has since retained his title, but has focused on linebackers.

In doing so, Michigan State added two quality transfer linebacker transfers: senior Jacoby Windmon from UNLV and fifth year Aaron Burne of the state of Mississippi. Between Crouch, Haladay, Windmon, and Brule, all have unique skills that Hazelton says can be weaponized.

“There’s a few guys in this room that have the ability to rush and you’d be like ‘Okay, you can go down there on third down and rush or we can blitz or we can use that,'” Hazelton said. “It helps the team as a whole to get more pressure.”

Then there is junior Darius Snow. He is listed as a safety and has spent the past two years playing safety and nickel back. However, he’s hanging out with the linebackers this spring hoping to add to his already versatile profile.

Snow got better every week last fall and won over the fanbase with his fun style of play. These are all positive remarks from the team regarding their time at linebackers, leaving a fascinating mystery as to what Michigan State has in store.

“That’s probably what suits him the best there,” Hazelton said. “There’s a lot of those same fundamentals that they use so he didn’t miss a beat moving there. It was awesome.

Share and discuss “MSU Spring Game: How to watch, what to expect and positions to watch on Saturday” on social networks.

Inside the NYPD manhunt for Brooklyn subway shooter