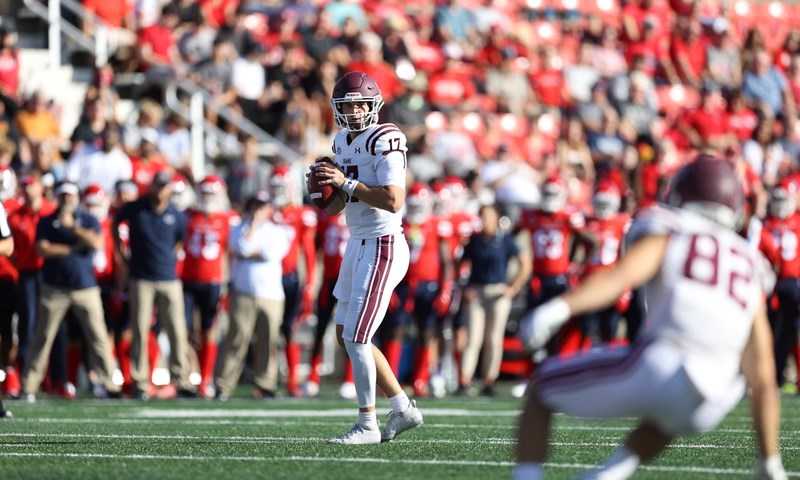 HOW TO WATCH / LISTEN TO THE PATRIOT LEAGUE FOOTBALL GAMES THIS WEEK
The week eleven schedule includes three important League games and one non-League game on Saturday. The day starts at noon with Georgetown in Lehigh on ESPN + and Fox Sports Radio Lehigh Valley 1320/1230 AM, while Bucknell travels to Army West Point on CBS Sports Network and WVLY 100.9 FM. Lafayette hosts Colgate with live coverage on ESPN + at 12:30 p.m. during a critical League game at Fisher Stadium. Fordham hosts Holy Cross at 1 p.m. on ESPN + and WFUVSports.org in a game that could decide the Patriot League Championship and the League’s automatic bid in the NCAA DI FCS playoffs. Home Patriot League matches can be watched internationally at https://patriotleague.org/watch.

TITLE OF THE LEAGUE OF PATRIOTS ONLINE THIS WEEKEND
Saturday’s game between Holy Cross and Fordham, both unbeaten in the league, will have significant implications for the Patriot League title. The Crusaders can win a share of their third consecutive League crown and the League’s automatic place in the NCAA DI Football Championship (FCS) division playoffs with a victory over the Rams. The Rams can land at least a share of the League title with a win over Holy Cross, but can’t land the playoff auto-bid unless Colgate (3-1) loses to Lafayette on Saturday. The victories for Fordham and Colgate will give the Raiders an opportunity to win a share of the League title with a victory over the Rams in the regular season finale on November 20.

HOLY CROSS JACOB DOBBS SELECTED FOR BUCK BUCHANAN AWARD WATCH LIST
Holy Cross junior linebacker Jacob Dobbs was added to the Stats Perform Buck Buchanan award watchlist for FCS Defensive Player of the Year when it was announced on November 10. Dobbs is among the leaders in the Patriot League and FCS in tackles per game (10.8). , tackles for loss per game (1.4) and sacks per game (0.89) while helping the Crusaders establish an unbeaten 4-0 record in the league this weekend. He joins Fordham senior linebacker Ryan Greenhagen and Lafayette senior defensive lineman Malik Hamm, who was selected on the initial watch list ahead of the season.

KOKOSIOULIS DE RAMS AMONG THE LEADERS OF FCS TD RECEPTIONS

Colgate Sr. DB / RS Will Gruber returned kickoffs for touchdowns in consecutive weeks, tying the Patriot League’s single-season and career touchdown record with two. Patriot League Special Teams Player of the Week GEICO first struck with a 100-yard return for a score at Cornell on October 15. Against Holy Cross on Oct. 23, he scored on a 99-yard return. Gruber joins 10 Patriot League football student-athletes tied for career record. He returned two kickoffs for touchdowns in a single season, joining Dante Ross (2004) of Bucknell and Matt Smalley of Lafayette. He’s also tied for the FCS lead with two kickoff returns for touchdowns this season.
THE RETURN OF THE TD LEADERS

Fordham’s first-year linebacker James Conway has been selected to Stats Perform’s Jerry Rice Award watch list. Now in its 11th season, the Rice Award is presented to the first National Student of the Year in the FCS. Conway, the reigning GEICO Patriot League Defensive Player of the Week and three-time League Rookie of the Week, is among the league and FCS leaders in tackles per game (12.13) and forced fumbles per game (0.50).

BROADCAST (ESPN +): PxP – Corey Spector; Analyst – Lance Haynes
RADIO BROADCAST (Fox Sports Lehigh Valley 12:30 / 1320 AM): PxP – Matt Kerr; Analysts – Jim Guzzo and Tom Fallon
Series History: Georgetown and Lehigh meet for the 26th time in series history, with the Mountain Hawks having a 19-6 advantage. Lehigh is 18-1 against the Hoyas since GU joined the Patriot League in 2001. The two programs first met in 1901, with Georgetown winning 22-0.
Last Meeting: (Oct 26, 2019) – Lehigh PK Austin Henning scored a 27-yard field goal as time passed to carry the Mountain Hawks to a 27-24 victory over Georgetown at Goodman Stadium. RB Zaythan Hill finished with 11 carries for 77 yards and one touchdown, while RB Nate Hope rushed for a pair of touchdowns in the fourth quarter. Hoyas QB Gunther Johnson completed 20 of 30 passes for 267 yards and three touchdowns. WR Michael Dereus had six catches for a career-high 155 yards and one touchdown, while WR’s Cameron Crayton and Joshua Tomas caught touchdown passes.

BROADCAST (ESPN + / LSN): PxP – Gary Laubach; Analyst – Mike Joseph; Touchline – John Leone
Series history: Colgate and Lafayette meet for the 65th time in series history, with the Raiders holding a 46-14-4 advantage, including winning five of the last six games. The two programs first met in 1906 with a 17-6 victory for Lafayette. The Leopards won the last meeting between the two teams, 24-10, during the spring 2021 season.
Last meeting: (March 13, 2021) – TE Steven Stilianos caught two touchdown passes to lead Lafayette to a 24-10 victory over Colgate at Fisher Stadium. QB Cole Northrup completed 9 of 14 passes for 141 yards and one of two touchdown passes, and WR Quinn Revere also threw a 28-yard touchdown pass on his only pass attempt while leading the Leopards with 67 receiving yards on three catches. DL Malik Hamm finished with seven tackles, 1.0 TFL and one pass break. LB Billy Shaeffer had six tackles and 1.5 TFL.

BROADCAST (ESPN +): PxP – Andrew Bogusch; PxP – Andrew Posada
RADIO BROADCAST (WFUVSports.org): PxP – Nick DeLuca; PxP – Andrew Gullotta
Series History: Holy Cross and Fordham meet for the 59th time in series history and for the 36th time since the Ram-Crusader Cup was awarded in honor of Major Frank Cavanaugh, who was a coach -Head of the two programs. The Crusaders lead the all-time series (31-25-2) which began in 1902. Since the start of the Ram-Crusader Cup in 1951, Holy Cross has a 20-15 record against Fordham.
Last meeting: (Mar 27, 2021) – Holy Cross quarterback Matthew Sluka scored three second-half touchdowns to lead Holy Cross to a 34-24 comeback victory at Fitton Field. Sluka rushed 12 times for 145 yards and two touchdowns and completed 2 of 3 passes for 33 yards and another touchdown on his college debut. LB Jacob Dobbs finished with a record 12 tackles with 1.5 tackles for loss and a half sack, while DB Terrell Prince had 10 tackles. DB John Smith had his second interception of the spring season. Fordham QB Tim DeMorat completed 39 of 56 attempted passes for 440 yards, two touchdowns and one interception. WR Dequece Carter had 155 yards on a career-high 11 receptions. LB Glenn Cunningham had seven tackles and 1.0 TFL, while LB Ryan Greenhagen had six tackles and 1.0 sack.

ABOUT THE LEAGUE OF PATRIOTS

How to watch, stream Cleveland Browns play the Patriots on TV