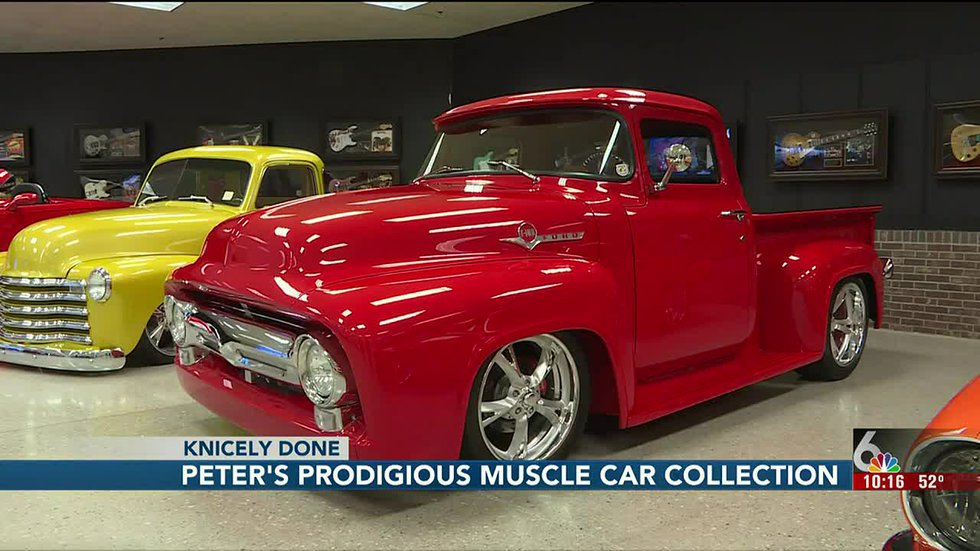 “It was a very special car for me, it was a 400 horsepower powered Formula 400, and I trolled it a lot and won a lot of races and for me that car was everything.”

That’s why Peter has the perfectly restored Firebird parked front and center in his own personal museum of American Muscle Cars. Over the years he has collected over 120 pristine classics which are on display.

Among the treasures is the first Firebird ever made.

“It’s VIN number one,” he explained, opening the passenger door to show the red interior complete with the original AM/FM radio. “All the firebirds that you saw after that, and all that went down that road all came after that. You know, what’s crazy is that it’s a convertible. Number two was a hardtop.

As he walks through the rows of cars, Peter can elaborate on the history of each fully functional, ready-to-run vehicle.

“They’re all Hemi cars, the big 426 Hemi made in the late ’60s that was on the Nascar track,” he said. “It was actually banned in 1970. That’s kind of what prompted Richard Petty to start.”

In another section are rows of Corvettes and in another area a line of Camaros which includes “a 1969 Yenko Camaro that they put a 427 engine in for drag racing. They only made 201.”

Peter pointed out another treasure, “a ’69 Charger Hemi that was built to go to the Chrysler museum and it went to the Detroit Auto Show and the World’s Fair in 1969. Somehow other the car was sold and i found it about 13 years ago and had the car restored chrysler found out and they tried to buy it back and put it in the chrysler museum its not for sale. “

Other eye-catchers include two elegant Ford Shelbys. “Ford brought back the GT in 2017-18,” he explained. “My two Shelbys carry VIN number 3, the first of each year offered to the public. Ford has VINs one and two each year.

It’s the kind of collection that is a treat to behold and with that in mind, Peter generously hosts charity events from time to time.

One is scheduled for Saturday, May 7 and led by Annali Leach, the current Woman of the Year for the Leukemia & Lymphoma Society of Omaha.

Several years ago he won the prestigious “Ridler Award” for his restoration of a 1940 Ford coupe.

Those who attend can pay extra to enter the museum, view the impressive collection of cars, and enjoy refreshments. Outside in the parking lot there will be a local car show with activities for children.

“The car guys always pull it off,” Annali said. “It’s because we always come together and each with a little that they can give and give big to this cause. It’s going to be awesome!”

Here is the link for more information on the “Cure Cancer Car Show”.

NYPR strengthens its presence on the scoreboard