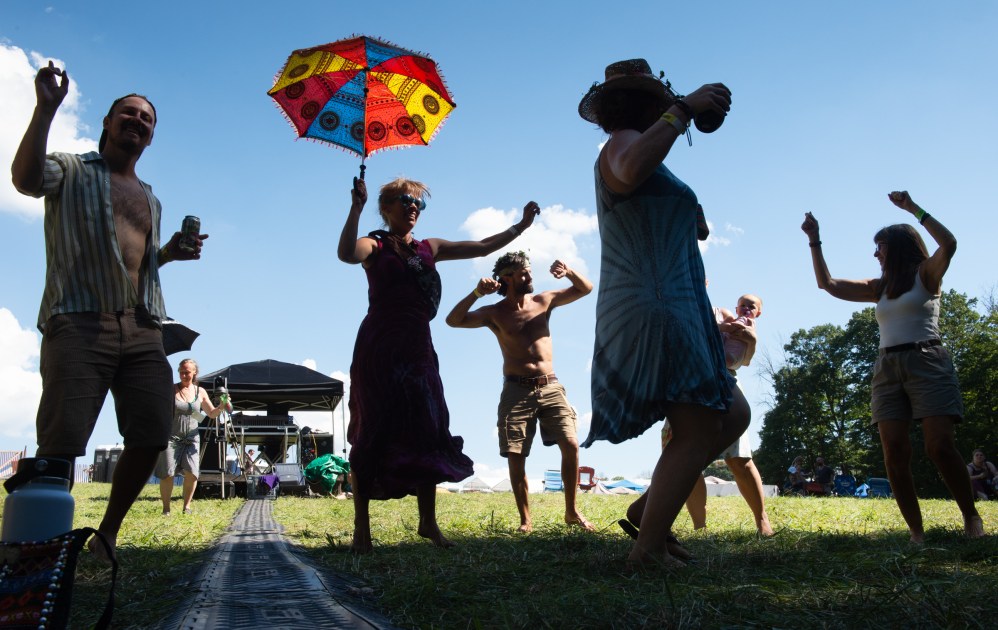 Photos from the Philadelphia Folk Festival: The 60th anniversary event is a success

A community comes to life after two years of virtual-only events.

Three generations of Berkheimers and Sciarras set up camp Thursday at Old Pool Farm and prepared to cook dinner. By late afternoon, the 80-acre fairgrounds in Upper Salford Township were quickly filling with thousands of people eager to attend the 60th anniversary edition of the Philadelphia Folk Festival.

Members of the Berkheimer and Sciarra families have been coming to the festival since 1975. Originally from Ridley, Delaware County, they have traveled for years from Colorado, California, Canada and Virginia to attend with their local relatives.

💌 Do you like Philly? Sign up for Billy Penn’s free newsletter to get everything you need to know about Philadelphia, every day.

The festival has taken over the Montgomery County farm just outside of town since 1962, earning it a place among the nation’s oldest outdoor music festivals.

Some of the performers have also crossed generations.

Singer-songwriter Tom Rush, who played on Saturday afternoon, is one of the musicians known for reviving folk music in the 1960s. Now 81, he is still gaining new fans , who discovered it on FM radio and listened to it on vinyl records released in mono and stereo versions.

A group called Trousdale, meanwhile, said their followers often discover them on Spotify. The Los Angeles-based trio of women in their twenties, who met while students at the University of Southern California’s School of Music, had members of the public sing along as they They were performing Friday afternoon, making their first appearance at the Philly Folk Fest.

While young music enthusiasts were well represented, a significant number of audience members turned grayer. Over the years, the festival’s crowds dwindled from its peak in the late 1960s until the early 1990s, when it reportedly attracted over 12,000 attendees for each of the four days.

But many still come, for the chance to mix music and camaraderie, and form lasting memories.

The event features more than song, with string orchestras, acrobatic performances, food vendors and a craft bazaar. It sparked romance and creativity – sometimes both at the same time.

Singer Shannon Lambert-Ryan remembers meeting Fionán de Barra at the Folk Festival in 2006. He asked her to go for a walk and suggested she record an album in his Dublin studio. Two years later, that’s exactly what she did when she recorded “Across the Pond.” That same year, the duo teamed up with percussionist Cheryl Prashker to found the Celtic roots band RUNA, and the following year they were married. Last weekend, the couple arrived to perform at the festival with their 4-year-old. His grandmother watched over him during performances.

After two years of virtual-only, the 2022 festival was an opportunity to mark the passing of festival co-founder Gene Shay, who passed away in April 2020.

A Philadelphia folk icon, Shay’s influence extended to FM rock radio, and local DJs Ed Sciaky and David Dye both cited him as a major influence on their careers.

Current festival organizers realize that their main challenge in the future will be to engage younger generations and achieve financial stability. The success of this year’s event is a step in that direction.

Scroll down for more photos from the 2022 Philadelphia Folk Festival.