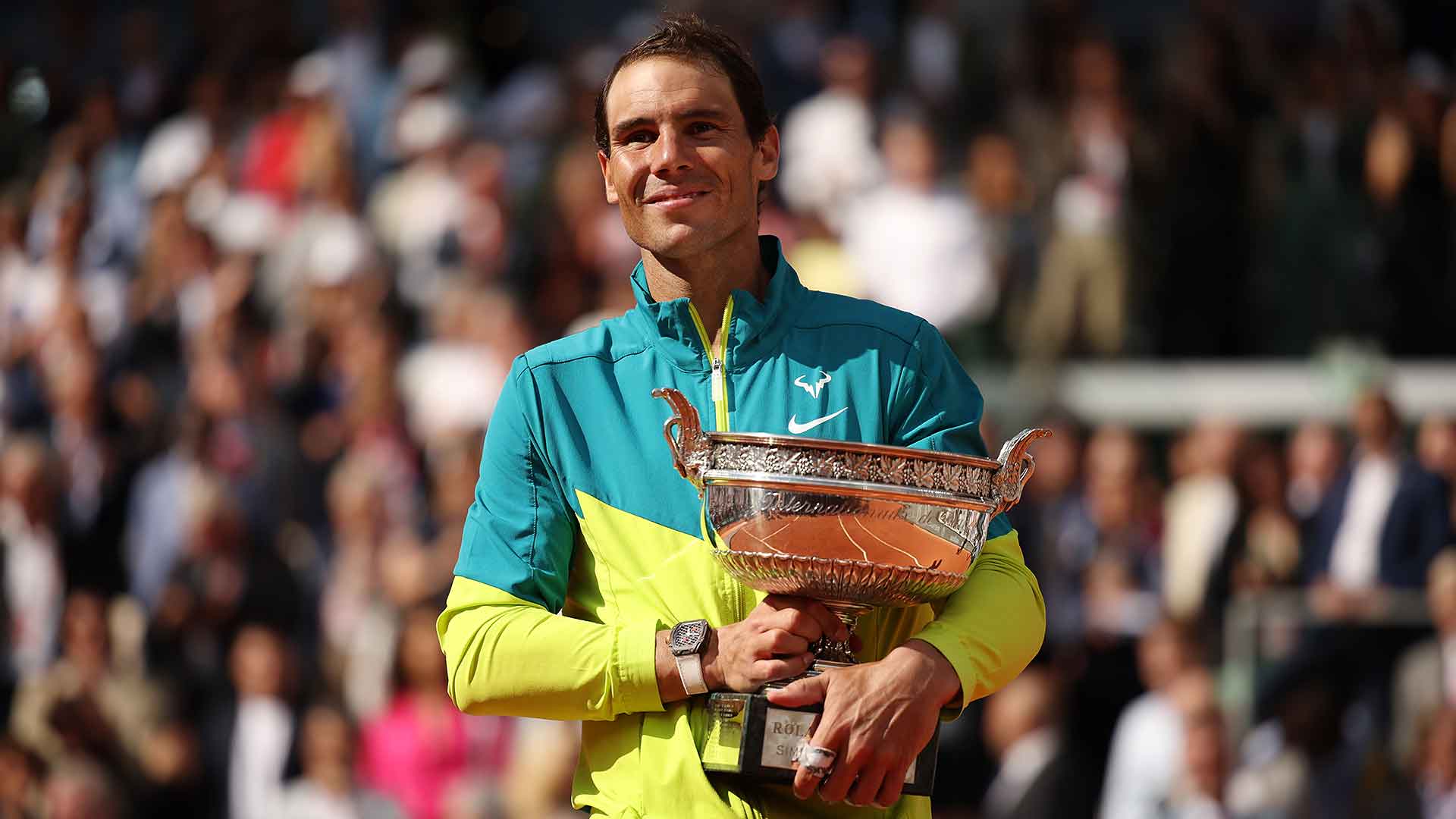 Rafael Nadal: ‘Having this trophy means everything’ | ATP tour

Rafael Nadal made history again at Roland Garros on Sunday, winning his 14th title in the French capital and his record 22nd Grand Slam trophy.

Following his win over Casper Ruud on Court Philippe Chatrier, the Spaniard has revealed his triumph in Paris was one of the most emotional and important victories of his career.

“For me, having this trophy next to me again means everything. [It] has been [an] emotional victory, no doubt. Unexpected in some ways. [I am] very happy,” Nadal said in his post-match press conference. “[It] has been a great two weeks. I played from the start, getting better every day. Finishing [by] play a good final. [I am] super happy and I can’t thank everyone enough for the support since the first day I got here. [It is] very emotional.”

The 36-year-old, who now holds a 112-3 record at the clay major, battled a chronic foot injury in his loss to Denis Shapovalov in Rome just over three weeks ago.

However, Nadal was not to be denied in Paris, passing Top 10 stars Felix Auger-Aliassime, Novak Djokovic and Alexander Zverev en route to a first ATP Head2Head meeting with Casper Ruud. The 14-time champion, however, admitted it was an injury that was causing him problems.

“I didn’t want to talk about the foot during the tournament. I said I was going to speak after the tournament, and now I can speak because I wanted to focus on my tennis and respect my rivals… I was able to play during these two weeks in extreme conditions,” Nadal said. . “I played with injections on the nerves to sleep the foot, and that’s why I was able to play for these two weeks.

“Because I have no sensation in my foot, because my doctor was able to do numbing injections on the nerves. It takes away the sensation on my foot. But at the same time, it’s a big risk in terms of sensation in less, a bit more risk of twisting your ankle… So of course Roland Garros is Roland Garros. Everyone knows how much this tournament means to me, so I wanted to keep trying and give myself a luck here.

Nadal admitted that although the situation is unclear, he aims to find a solution so he can compete at Wimbledon later in June.

“I don’t know how to say in English exactly the treatment, but [I am] going to have a radio frequency injection on the nerve and try to burn the nerve a bit and create the impact that I now have on the nerve for a long time,” Nadal said. “That’s what we’re going to try. If it works, I [am] will continue. If that doesn’t work, then [it is] Go [to] be another story.

The Spaniard, who has said he is determined to continue playing as long as he is comfortable and happy on the pitch, has now extended his lead over Novak Djokovic and Roger Federer in the hunt for Grand Slam titles. The Serb and the Swiss are tied on 20 Major titles, while Nadal has 22 Slam crowns.

Still, the former world number 1 says it’s not the records that drive him, but the love he has for the sport, which he started playing professionally in 2004.

“It’s not about being the best [in] the story. It’s not about the files. It’s about what I do. I like to play tennis. And I love competition,” Nadal said. “As I’ve said many times in the past, and it’s not something I repeat, it’s not the thing I don’t feel about myself, we achieved our dreams. Me, Roger , Novak, we have achieved things that we probably did not expect.

Unlike the Spaniard, who was playing his 14th final in Paris, Ruud was playing his first Grand Slam championship match. The champion was full of praise for his opponent, who has been training at Nadal’s academy in Mallorca since September 2018.

“Casper is a great player. He will be the fourth in the [Pepperstone ATP] Race [To Turin] now. Very high position in the ranking, improving every year because in the past he had only been a great player on clay,” said Nadal. “Now he wins titles and also fights for the most important events on the other surfaces.

“It is, for me, it is the most important thing in sport. The value of daily work, he has it. He is improving all the time, and even though today was probably a day difficult for him, I’m sure he’s very proud and his team is very proud of him… I would love to see him with a trophy in the future.