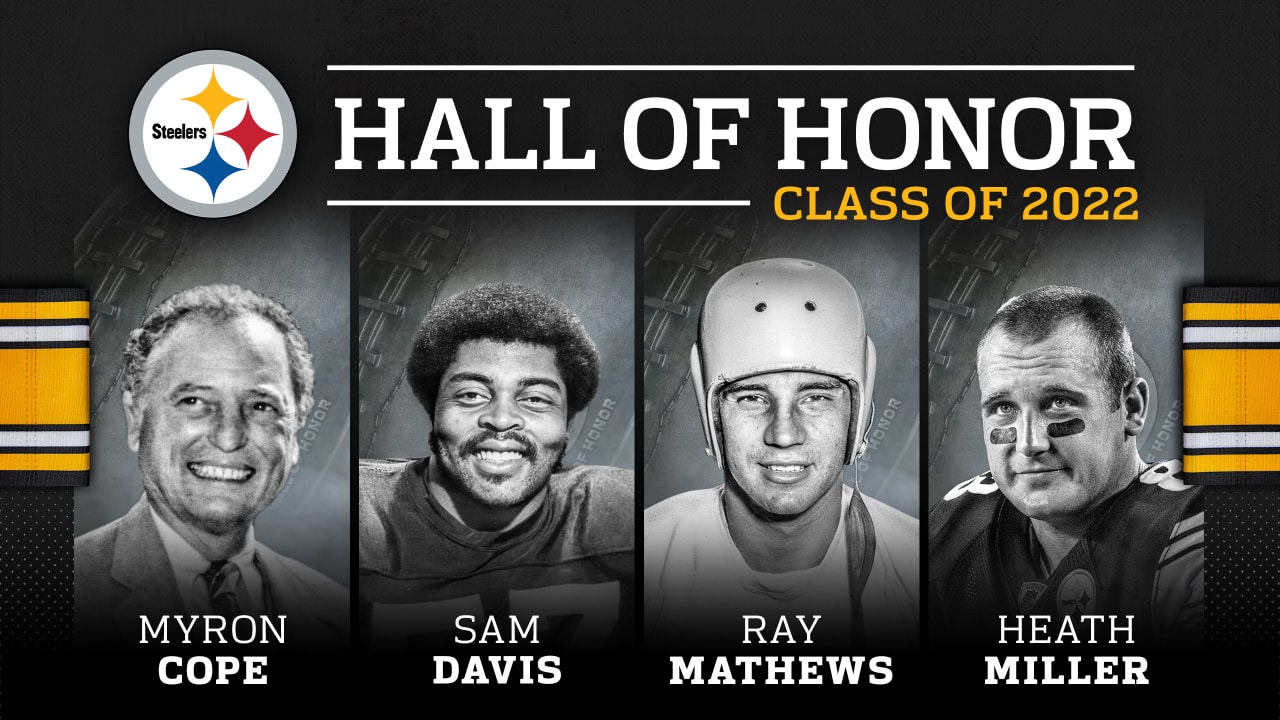 The majority of people who have been enshrined in the Steelers Hall of Honor will be forever remembered for their plays on the field or their coaching prowess.

But for Myron Cope, he will be remembered for something else.

Oh, and also a little something called the terrible towel.

Cope became a household name when he was hired as a radio commentator for the Steelers games in 1970, and oh was he colorful. He brought a unique approach to the stand until his final season in 2004, an approach that endeared him to listeners and made him a Pittsburgh legend.

He was also the creator of the famous Terrible Towel, something that has stood the test of time with Steelers Nation and can be seen in stadiums near and far whenever the black and gold comes on. field. It all started in 1975 when Cope encouraged Steelers fans to bring a yellow tea towel to the team’s playoff game against the Baltimore Colts and invite them to join the team. The fans responded, the Steelers won, and the legend of the Terrible Towel began.

In true Cope fashion, however, he made sure the Terrible Towel was not just something to wave at games, but also something to help out the community. He trademarked the Terrible Towel brand, and a portion of the proceeds from the sale of the towel was donated to Merakey Allegheny Valley School, a private, nonprofit organization that supports adults with intellectual and developmental disabilities throughout Pennsylvania.

Cope’s professional career has gone far beyond the Steelers broadcast booth. He was a writer, something he was very proud of, and wrote for Sports Illustrated as well as many other publications. Cope hosted a nightly talk show on WTAE-AM, in addition to being a sports reporter for WTAE-TV.

Cope was a voice Pittsburgh could trust, someone who wasn’t trying to make headlines, but was just trying to bring you the facts.
“You have to take a step back,” Cope said on the day of his retirement. “For me, I’m most proud of my credibility. I’ve always kept it. I want people to believe that if I say something, I know what I’m talking about, at least partially, and that’s what I believe. I’ve never played devil’s advocate on my talk show in the almost 22 years since I’ve had it. I’ve never done it because I didn’t want to say something and didn’t believe it, so I think people bought me… I was on high alert all the time… are you believable, Cope?”

He was a long-shot, someone known as the ‘sleeper’ when he entered the NFL as an undrafted rookie in 1967, one of the Hall of Fame staff guru’s many gems that Bill Nunn discovered.

But one thing you quickly discovered about Sam Davis is that when it came to his playing skills, he wasn’t sleeping.

Davis came to the Steelers from Allen University, a small school in Columbia, South Carolina, whose enrollment at the time was less than 1,000 students. Davis spent his summers in South Carolina, one of the few players who practiced at school before the start of each new season to be at his best, as he dreamed of taking his game to the next level.

That dream came true when the Steelers signed him, but it came true even more when he got the starting left guard spot his third season and started on four Super Bowl championship teams in the 1970s. .

“He had a tenacity that really served him well,” said former tight end/tackle Larry Brown, also a Hall of Honor member. “He played with great technique and was tenacious. They would fight the whole game, and Sam was usually going to win that.”

When former Steelers quarterback Terry Bradshaw was inducted into the Pro Football Hall of Fame in 1989, he gave Davis a well-deserved tribute.

Davis, who died in 2019 aged 75, was also an attacking captain for much of his career, known to teammates as a quiet man who led by example. And he wasn’t afraid to share his knowledge, helping out a young Craig Wolfley who eventually replaced Davis.

“Sam was just a great teammate,” Wolfley said. “He showed me what it meant to be a Steeler, to help a kid like me learn the game.”

He played before the Steelers reached their glory years, but Ray Mathews brought his share of glory to the Steelers with his game for nine seasons in the black and gold.

Mathews was drafted in the seventh round of the 1951 NFL Draft, the 81st overall selection out of Clemson.

He finished his Steelers career with 230 receptions for 3,919 yards, which ranks him 11th in team history.

One of the best games of his career came against the Cleveland Browns in 1954, the first time the Steelers beat their rival. Mathews scored four touchdowns, including three touchdown receptions, in the 55-27 victory.

Mathews, who attended McKeesport High School in the Pittsburgh area, was one of the Steelers’ early hometown heroes. And he did his hometown proud as a two-time Pro Bowl selection (1952 and 1955).

Mathews ended his playing career with the Dallas Cowboys in 1960 after being selected by them in the expansion draft and became a coach after his playing days.

When you think of Steelers tight ends, the first name that comes to mind is undoubtedly Heath Miller.

Or should I say, ‘Heeeeath.’

Miller was the Steelers’ first pick in the 2005 NFL Draft. Miller, who played 11 seasons, started 167 of 168 games played during the regular season, and he started all 15 postseason contests in which he participated. Miller’s 168 regular season games are the tightest in Steelers history.

He was someone to be relied on, and someone the Steelers Nation adored, noticeable every time he caught the ball when they burst into a unified “Heeeeeath” roar.

As the great player that he was, he never considered himself a superstar, never sought the spotlight, never congratulated himself.

When he retired in 2015, he wanted no fanfare, just releasing a statement.

“Today I notified the Steelers of my intention to retire,” Miller’s statement read. “I realize how extremely lucky and grateful I am to have spent my entire career as a Pittsburgh Steeler. I would like to thank the Rooney family, Kevin Colbert, Bill Cowher, Mike Tomlin, James Daniel and the rest of the team. Steelers organization for providing the opportunity to live out my childhood dream. I will always cherish and appreciate the special bonds I have forged with my teammates. It was truly an honor for me to take the field with them. J Also appreciate all of my family and all of the coaches who have helped me along the way, and I want to thank Steelers Nation, the NFL’s best fans.

“Finally, I owe the greatest thanks to my wife, Katie, and our four children for their unwavering support.”
And with that, the best tight end in Steelers history quietly walked away from the game.

But what he did for the team will remain forever.

“It’s been an honor and a pleasure to coach him, to watch him grow, evolve and perform,” coach Mike Tomlin said emotionally after Miller’s retirement. “To see him grow in every way. He’s not low maintenance, he’s had none. He’s always put the Pittsburgh Steelers first in every aspect of his professional life. I don’t know not if I can describe that. I don’t know if there’s been a guy I’ve been around who is like him from a selfless standpoint. In large part and in any case, we’re all human, we all fall short. I don’t know if I’ve ever seen a regretful moment in him. It just shows who he is.

Miller retired as the all-time leader in receptions (592), receiving yards (6,569) and receiving touchdowns (45) by tight end. He was a member of the Steelers’ Super Bowl XL and XLIII championship teams, was a two-time Pro Bowl selection and was the team’s most valuable player in 2012.

“His talent. His commitment. His drive, his determination,” said Tomlin, who coached Miller from 2007 to 2015. “The day-to-day example he set for others. The legacy that is his career will affect us and especially the tight end position here in Pittsburgh for a long, long time. I imagine there will be guys who reflect and represent his values ​​for years to come. Hard-hitting guys like him always do.