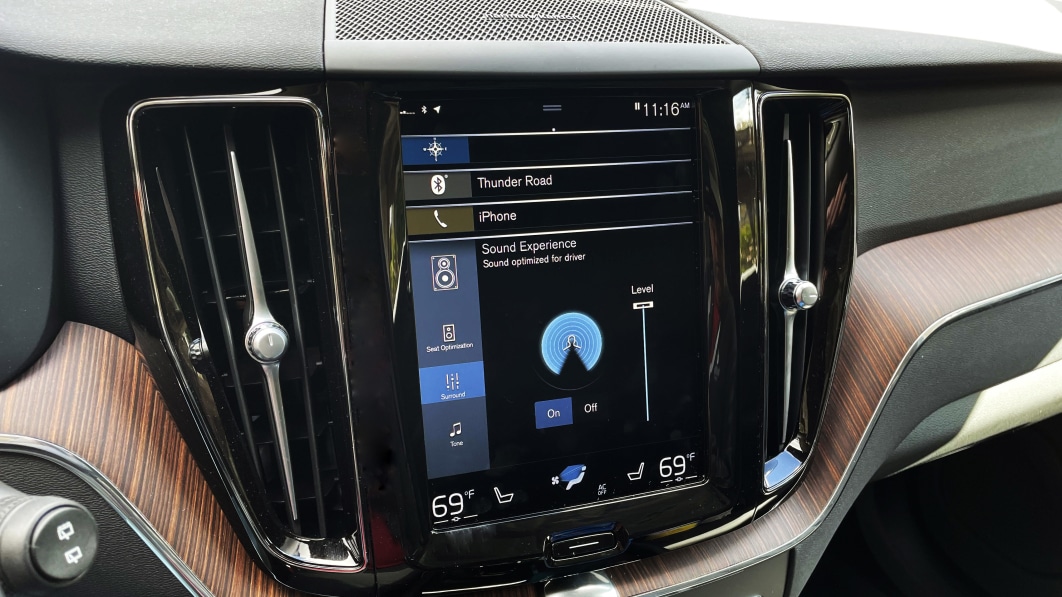 Linda Ronstadt shouldn’t look like her head is in a bucket.

Renée Fleming must not seem to wander at the back of the orchestra.

But depending on your car stereo setup, they could all be like this.

Most cars these days offer brand name audio systems, usually as an upgrade. It’s a trend that has spread from mainstream brands like Sony or Bose to more esoteric audiophile choices; we recently learned that venerable English-speaking automaker KEF is teaming up with venerable English automaker Lotus. The partnership that has caught everyone’s attention is Jeep and hi-fi legend McIntosh, with the superb result you’ve come to expect.

Vehicle audio systems now output hundreds of watts through a dozen or more speakers. (The new BMW 7 Series B&W setup has 36!) So why, then, does the car’s audio sometimes sound… a little meh?

It may be because you have enabled “surround sound”.

I first realized this years ago when I owned a 2014 Toyota Highlander. Music through its JBL Entune system sounded limp. At the bottom of the menus was a checkbox for surround sound. Uncheck that, and a veil has been lifted.

Until I discovered this hidden set, I hadn’t realized the car had surround sound. And you might not know it either.

Let’s take a moment to explain that so-called “surround sound”, or in some cases “3D” sound, is not the same as 5.1 or 7.1 surround sound from your home theater. Movie soundtracks are actually recorded in surround, and your home A/V receiver can reproduce that. But the music, with rare exceptions, is recorded in stereo.

Surround sound in a car is something different. This is signal processing – in which a stereo recording is not reproduced in two channels on two loudspeakers (or left-right sets of woofers-tweeters-midrange) as artists and sound engineers had it foreseen.

More immersive sound is the intention.

The problem is that signal processing can compromise clarity. Voices are broadcast, away from a clear focal point on the dashboard.

Why? Automakers and sound engineers thought they had problems to solve. When you listen to a stereo, you sit in a sweet spot facing two speakers, and they stereophonically generate an “image,” aka the soundstage, that replicates what both of your ears would pick up if you were watching a live show. (At home, you can also use that other music-enhancing device, a glass of wine.) In a car, however, no one can sit in the sweet spot. It doesn’t matter that even at home not everyone can sit in the best chair.

Another challenge: the interior of a car is a small, enclosed space with an odd mix of hard surfaces like windows and soft surfaces like occupants and seats.

So, using signal processing, engineers are trying to improve the listening experience throughout the cabin – even to create a “concert hall” feel. (A system is touted as replicating the “power” of a stadium gig. Now, when have you ever heard great sound in a stadium?)

Either way, more immersive sound is the intention. The problem is that signal processing can compromise clarity.

I recently spent a few hours toggling between surround and stereo on a Harman/Kardon system in a 2021 Volvo XC60. This is a 600 watt, 14 speaker, $800 upgrade from l one of the biggest audio companies. (Harman is owned by Samsung and in turn owns JBL, Infinity, Mark Levinson, Revel and many other brands.) So it’s a decent middle-market system for a listening test. (Volvo’s top-of-the-line system comes from Bowers & Wilkins.)

I streamed lossless tracks over home WiFi while connected to Apple CarPlay. The Bass, Treble, and Mid sliders have been set to the neutral middle setting. Surround was generally high since that’s what we’re testing. I sat in the driver’s seat – the chair that’s always occupied, so in my opinion that’s where the music should sound best. Granted, surround sound may be preferred if you’re seated in the back.

Ronstadt, in older recordings via surround, was muted and echoed. “Long Long Time” was less heartbreaking. The opening of “Hurts So Bad” was less intimate, and the cries of “No! No!” less raw. His later recordings at Skywalker Ranch or with Nelson Riddle, however, were interesting in surround, sounding more spacious with reverb.

The purest substance in the universe is Dolly Parton’s voice. For some reason the surround sound couldn’t hurt him.

Radio announcers, like those on an NPR newscast, also gained reverberation, as if standing in an empty concert hall instead of a broadcast booth. Some kind of strange effect.

Opera voices like Jessye Norman or Reneé Fleming, while still powerful, lost a few megawatts. Nina Simone and Ann Wilson too. Delicate vocals like Shawn Colvin’s have become thinner. Voices are broadcast, away from a clear focal point on the dashboard.

A famous story goes that when German engineers were developing the MP3 format, they’ve played “Tom’s Diner” by Suzanne Vega a thousand times like a reference track, trying to capture the nuances of his a cappella. (Vega, also famous, told them they didn’t.) So, I tried this song for fun. In the surroundings, she has practically disappeared.

There were exceptions: the purest substance in the universe is Dolly Parton’s voice. For some reason the surround sound couldn’t hurt him.

Male vocals like Johnny Cash have lost some presence but not much. Leonard Cohen’s “You Want It Darker” was almost a relief in surround because it took about 10% off the loudness level. You want it darker, play it in stereo.

And you wouldn’t think anything could dull a David Gilmour guitar solo. But part of the bite was lost.

The orchestral music gained volume in the surround, but here too the instrumental solos lost their presence and the whole became muddy: in the fourth movement of “Pines of Rome” it was difficult to distinguish the eerie rumbles from the bass instruments. (The same goes for the orchestration in Pink Floyd’s “Comfortably Numb.”) However, Respighi’s antiphonal brass section called the Roman army to war from the back seat, so that was cool.

I’ve done a wide sampling of tracks and compiled opinions in the list below. All of this is of course very subjective.

Modern recordings can take signal processing into account. Bass seems to lose punch in surround; the bass of Jon Baptiste’s Grammy-winning “We Are” was crushing in stereo, better balanced in surround. Other current recordings like those by Kacey Musgrave and Orville Peck seem to take advantage of the reverberant qualities of surround.

So who is the winner here? Really, it differs from record to record. Surround sound is sometimes a neat trick. Obviously I prefer the simplicity and clarity of stereo. But your car, your music, do your own test. However, you only have two ears, so a good old stereo might be hard to beat.

Tracks that sounded best in stereo:

Tracks that sounded about as good or maybe better in surround: