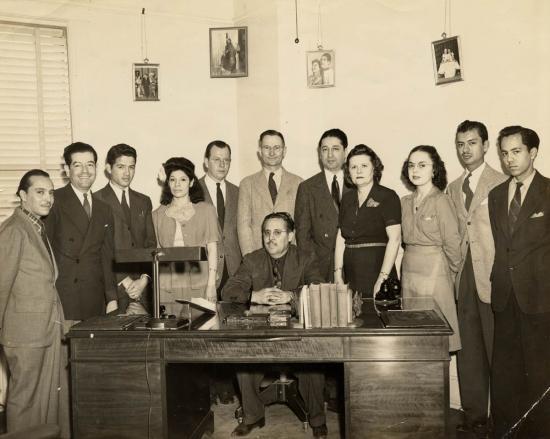 (radio) stations in the 1920s. Could you report on the first Spanish-speaking radio station, and who owned and advertised it?

Our city was a “frontier for Spanish-language radio programming and is widely recognized as home to the first full-time Spanish-language station owned by a Latino,” said Alan B. Albarran and Brian Hutton in “A History of Spanish – language Radio in the United States â€, a 2009 article prepared by the Center for Spanish-language Media at the University of North Texas for rating provider Arbitron Inc. (now Nielsen Audio).

That owner was Raoul (sometimes spelled Raul) Alfonso Cortez Sr., who gave the first syllable of his last name to the call sign of this station. KCOR radio was first broadcast on February 15, 1946, advertised as “the only Anglo-Spanish radio station in San Antonio”.

Cortez was already a media professional, a former reporter for La Prensa newspaper whose father ran a radio station in Nuevo Laredo, Mexico, before the family moved to San Antonio during the Mexican Revolution.

The â€œfirstsâ€ can be difficult to define. San Antonio’s KONO radio had already broadcast dedicated Spanish language hours since the 1920s, and Mexico City’s XEW relayed its programs to California stations in the 1930s. It took a little longer to get the support needed. at a station operated by Mexican Americans for a predominantly Mexican-American audience.

Before there was a full-time Spanish-speaking station here, Cortez had been a broker who bought underutilized time – usually early in the morning – from local radio stations and used it to book artists. and Spanish-speaking advertisers, an experience that made him aware of local talent and sponsors.

He applied for and got his broadcaster license from the United States Federal Communications Commission, or FCC, in 1943, but had to wait to use it.

“During World War II, many Americans feared that non-English radio would be used to broadcast seditious messages, and the FCC imposed strict controls on what was allowed to be broadcast on the air,” says Jordan Grant in â€œEarning a Place on the Dial: Raoul Cortez, KCOR and Spanish-Speaking Radioâ€ on the Smithsonian Institution’s National Museum of American History website.

Granted in 1943, this original license was valid for 1946 to 1948. As reported by the San Antonio Light, Cortez – “associated with Abe San Miguel, deputy prosecutor”, as legal counsel – would head KCOR, 1350 AM, at from a studio in the Calcasieu building, 214 Broadway, with a transmitter in the 5000 block of Commerce Street. The new station debuted with a sunrise-to-sunset schedule – 7:15 a.m. to 6:30 p.m. – that would span one hour at both ends during KCOR’s first year. From a modest 1,000 watts, its power would also increase steadily, reaching 5,000 watts by the end of the decade.

On ExpressNews.com: At one time, Centeno was San Antonio’s largest independent grocer

KCOR did everything other mid-century radio stations did, but much of it was in Spanish. The station took song signings over the phone; read news, including sports and a farm report; and performed a mix of music by local, Mexican and international artists, live or recorded. There was music from Argentina, Brazil and Cuba, as well as conjunto and mariachi ensembles from San Antonio, the Kelly AFB choir and the â€œTalent Searchâ€ contestants. There were church services and â€œsermonettesâ€ and a weekly news program from Catholic schools in the city. A “Man on the Street” show sent an announcer to ask provocative questions about the current events of random Spanish-speaking pedestrians.

Cortez had outlined his public service plans in his FCC candidacy, and he quickly kept his promise. The station opened with recorded goodwill messages from Mexican President Avila Camacho and Texas Governor Coke Stevenson; broadcast round tables, such as the one on the â€œPalestinian questionâ€ at Our Lady of the Lake College (now university); and provided advice to the city’s health department during a polio outbreak as well as English and Spanish language classes and a daily educational program on improving listeners’ English.

As the station continued to grow in the early 1950s, a team of writers, actors, and producers produced more original shows, such as novels (drama series), political talks, children’s shows, and dramas. variety shows. The hours after 9:30 p.m. were eventually spent on programming for black listeners. The station raised funds for survivors of the 1954 South Texas floods and aired a show in which listeners helped each other find jobs.

In 1955, Cortez launched KCOR-TV, “the first Spanish-language television station owned by a Hispanic in the continental United States,” according to the museum’s website. Like KCOR radio, the television station would introduce civil rights, political and religious leaders to the community, while developing its own news and entertainment programs.

The broadcast pioneer sold both outlets in 1961 – the radio station to Inter-American Radio Inc. and the TV station to a group of investors led by her son-in-law, Emilio Nicolas Sr., after which she was now KWEX. The two have become part of the Univision network.

Cortez died in 1971; the Cortez branch of the San Antonio Public Library is named in his memory.

According to the Congressional Record, the Cortez and Nicolas families have been recognized April 21, 2020, in the United States House of Representatives for their â€œcontributions to the Hispanic mediaâ€ as pioneers in the field of radio and television in Spanish and English.