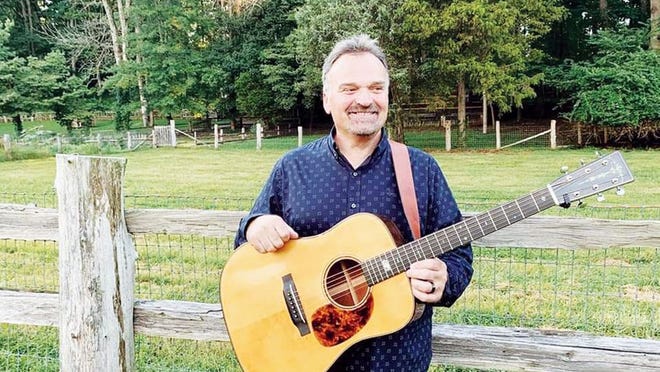 Before I write about the upcoming finale of the ORNL-FCU Summer Sessions concert series, I want to reflect for a moment on the 24th anniversary of Credit Union’s production partner, radio station WDVX 89.9 FM.

When WDVX first hit the airwaves in the late 90s, people weren’t afraid to take risks. Tony Lawson, Don Bergraff, and their inner circle of cohorts opened the station in a used campervan at a roadside campground in Clinton. Not a project for the faint of heart. But the setting was perfect for the music, on-air staff, and traveling musicians passing by the RV, like Jim Lauderdale, Johnny Hartford, Blue Highway, and the Old Crow Medicine Show.

Every year in November when WDVX’s anniversary rolls around, it feels more poignant to me, one way or another. It’s like looking at your wedding ring. When it’s brand new and you slip it on your love’s finger, there is a cascade of feelings that you never forget. Ten years later, gold has a richer patina. After 20 years, this ring means everything, and each additional year doubles its value, until it is simply out of the ordinary. Invaluable. Until death do us part.

Well, therein lies the problem. WDVX’s 24th anniversary is more than a little bittersweet, because a year ago we lost Steve Gulley.

I hadn’t known Steve for a very long time, but we became friends so easily, it was like I had known him all my life. And when he put on a show with Doyle Lawson at the Museum of Appalachia in March 2020, to sit on stage and just talk, not play, I knew I wouldn’t miss him for the world.

It was a living and breathing immersion in the history of music, felt with so much gratitude and passion by Steve that he was moved to tears when he tried to thank Doyle for making the evening possible.

It wasn’t just talk, no action that night, though. Steve Gulley’s band New Pinnacle joined him on stage for a few tracks, along with special guest Phil Leadbetter, dobro player of the ages, and they burned the barn to the ground.

Steve found an unexpected niche as the early morning DJ of “Rise and Shine” on WDVX. There was something so precious about his intros and pre-dawn selections, his memories and stories, his connection to mountain gospel, and the quiet warmth of his Claiborne County accent, which I will always associate with her voice in the rising sun of the river Clinch mist. .

But suddenly, at the end of the summer, there were no more concerts anywhere, Steve was no longer on the air. And on August 18th came the sad news that Steve was having a concert in Heaven. Sad for us, but I’m not sure if another human could be more confident than Steve about what to expect on the other side.

WDVX is blessed with great strengths like being in downtown Knoxville, having an excellent broadcast studio and live performance venue, with first-class technological capabilities, ingenious engineers and the most audience. faithful that a radio station could ask for. But its greatest asset is the on-air and behind-the-scenes staff that make WDVX the incredible 24/7 cultural resource that has proven itself to be for two dozen years.

So happy birthday to East Tennessee. Keep up the good work.

In this coming year back, ORNL-FCU and WDVX thrilled us with their July presentation of Sierra Hull, who didn’t like the crowd’s social distancing from the stage, so she took her band into the ‘grass, surrounded the audience. , and blew everyone away with an improvised set that hit the headlines of roots music newspapers around the world. In August, Rodney Crowell took the Summer Sessions to the top floor of the singer / songwriter Hall of Fame and showed everyone why he had the keys.

The concert in September was rainy, which is a shame because the Songs From The Road Band, as clumsy as their name is, were ready to convince you that you will never forget them.

This is the kind of show that a producer could sell 5,000 tickets for at $ 50 to $ 100 each, a show that people will travel 100 miles to come and see. But you can enjoy it for free! It’s The SteelDrivers, plus Michael Cleveland and his band, Flamekeeper.

Yes, those SteelDrivers, the group that started Chris Stapleton.

First, a word about Michael Cleveland and his band, 2019 Grammy winners for bluegrass album of the year. I waited all summer to see this guy play. There is nothing I can say that will adequately prepare you to experience the sheer glow that is pouring out of it. It is amazing, inspiring and breathtaking.

If you have 75 minutes free in the next few days, go to YouTube and watch the documentary called “Flamekeeper: The Michael Cleveland Story”. If you do, I guarantee you won’t miss the opportunity to see him live on the Summer Sessions stage at Oak Ridge.

The SteelDrivers have been together since 2005. The main quartet consists of Tammy Rogers (violin), Mile Fleming (bass), Richard Bailey (banjo) and Brent Truitt (mandolin). The original singer of the group was a guy named Chris Stapleton.

They were committed to originality from the start, so they never sounded like any other American bluegrass roots band. They wrote all the songs they recorded. They were the one and only SteelDrivers, and that was a pretty powerful thing to be.

Until Stapleton resigned. You can characterize his career development however you want, but it was anything but friendly. It was just “see you, I wouldn’t want to be you.” Definitely not smooth like Tennessee whiskey.

You know, if I were to sing “Tennessee Whiskey” like Chris Stapleton has to do at every gig he’s done since he left The SteelDrivers in his wake and every gig he does from now until to eternity, with that signature but that silly little tweet runs through the song, it would drive me crazy. Crazy nuts. It made me hate that song, and I love Tennessee whiskey. (I am passionate about the Chattanooga Whiskey brand, especially their Experimental Single Barrels.)

Showing no panic (although there was a lot), the Drivers sought out another vocal specialist and hired a Stapleton-like sound named Chris Nichols. They recorded an album called “The Muscle Shoals Recordings” and it won the 2016 Grammy for Album of the Year. Hope they burnt the price with a case from Chattanooga.

Then Nichols resigned. What is the…

The group rushed out again and found a guy named Kelvin Damrell in Berea, Kentucky. He did the occasional gig with local rock bands, but his bread and butter job was the roof. Salt of the Earth, without waiting for a higher call. But wouldn’t you know, someone posted a video on YouTube of Kelvin singing, and one of the pilots’ children saw it, and an audition invitation was sent to Berea. The next thing he knew, Damrell was explaining to his wife that the musicians who had recorded his favorite song had just asked him to join them.

Through it all, to their great merit, the SteelDrivers functioned like a SpaceX rocket. There were perfect launches from Cape Canaveral, and the payloads (Stapleton, Nichols) were sent perfectly into orbit or to the Space Station. And most people think that’s the spectacular part. But then the launcher’s rocket (The SteelDrivers) turns around, performs a controlled descent, and lands perfectly on a barge in the Atlantic Ocean, or back at the NASA launch complex in Florida, like a carrier pigeon from several million dollars. And a few weeks later, it’s ready to go!

In space exploration and in bluegrass music, isn’t this the most exciting time to be alive?

“Of course, I still love you” had 69 successful SpaceX landings. “Just Read the Instructions” had 22 successful landings. And the SteelDrivers have made landings that are safer than that.

Come see them on October 23 at the Performing Arts Pavilion in AK Bissell Park. See what real creative muscle looks like. And discover the musical genius of Michael Cleveland. It is a sight you will never forget.

John Job is a longtime Oak Ridge resident and a frequent contributor to The Oak Ridger.

How mobile devices can be tracked via Bluetooth analysis • The registry