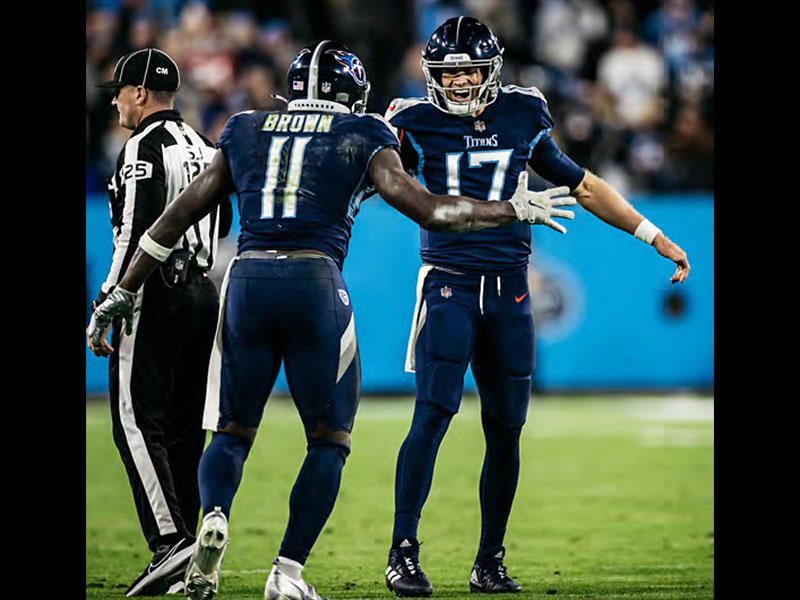 The Titans enter the playoffs as the top seed in the AFC field after finishing 12-5 in the regular season and winning their second straight AFC South crown. They tied the Kansas City Chiefs for the best record in the conference, but earned the tiebreaker due to their head-to-head victory over the Chiefs on October 24. With the No. 1 seed, the Titans earned the AFC’s only first-round bye in the playoffs.

This week marks the second all-time postseason meeting between the Titans and Bengals franchises. In 1991, the Bengals defeated the Oilers 41-14 in a wild card contest in Cincinnati.

Fans can live stream the broadcast on their mobile devices from the Titans mobile app (iOS and Android), as well as on desktop and mobile web at TennesseeTitans.com. Paramount+ will also be streaming the game live. Restrictions apply. For more information and more streaming options, visit TennesseeTitans.com or NFL.com/ways-to-watch.

Additionally, Westwood One Sports will broadcast the game to a national radio audience. Play-by-play announcer Ryan Radtke, analyst Tony Boselli and journalist Laura Okmin will have the call.

About the Tennessee Titans

The Titans clinched their division title and third consecutive playoff appearance under head coach Mike Vrabel with a Week 17 victory over the Miami Dolphins, celebrating the franchise’s first consecutive division championships. since the Oilers won the first three AFL East Division titles from 1960 to 1962. Vrabel joined Jack Pardee and Jerry Glanville as the only head coaches in team history to chair at least three playoff teams in their first four seasons as head coach.

The Titans have made the playoffs in four of six seasons since Jon Robinson was hired as general manager in 2016. In that time, the Titans and Kansas City Chiefs share the distinction of being the only franchise in the NFL with six consecutive winning streaks.

In Week 18, the Titans traveled to Houston in need of a win to claim the AFC No. 1 seed and give them a bye week as the other six playoffs in the AFC were battling in wild card games. With four touchdown passes from quarterback Ryan Tannehill, the Titans held off a second-half push from the Texans and held on for a 28-25 victory. This is the franchise’s third time in the Super Bowl era and the first time since 2008 to enter the playoffs with the No. 1 seed.

Since becoming a starter for the Titans in 2019, Tannehill’s regular season record is 30-13. He is the first franchise starting quarterback since Warren Moon (1987-1993) to lead his team to the playoffs in three straight seasons. During the 2021 regular season, he passed for 3,734 yards and 21 touchdowns, and he added seven rushing touchdowns.

Tannehill and Moon are the only players to record multiple seasons with at least 3,500 passing yards for the franchise.

For the third straight season, Tannehill’s top target was wide receiver AJ Brown, who had 63 receptions for 869 yards and five touchdowns. With 2,995 career receiving yards, Brown has more than any player in franchise history in his first three NFL seasons other than Charlie Hennigan (3,336 from 1960-62).

Titans running back Derrick Henry hasn’t played since being placed on injured reserve after the Oct. 31 game against the Indianapolis Colts. On January 5, he was slated for the return, opening a 21-day window in which he can train and eventually return to the active roster if the team chooses.

Prior to his injury, the two-time NFL rushing champion had 937 yards and 10 touchdowns on 219 carries, leading the league in every category for eight weeks. Even without Henry for much of the season, the Titans finished fifth in rushing offense in 2021 averaging 141.4 yards per game. D’Onta Foreman led the team in rushing during Henry’s absence, rushing for 566 yards.

Safety Kevin Byard led the team in tackles (88) and interceptions (five), while outside linebacker Harold Landry III set a career high and paced the defense with 12 sacks. Landry, along with defensive linemen Denico Autry (nine sacks) and Jeffery Simmons (8.5), helped make the Titans the only NFL team in 2021 with three players totaling at least eight sacks each.

About the Cincinnati Bengals

While the Titans rested with a bye last weekend, the Bengals hosted the Las Vegas Raiders on Saturday as part of the wild card round. Sophomore quarterback Joe Burrow threw two touchdown passes and Evan McPherson scored four field goals to help the Bengals to a 26-19 win. It was Cincinnati’s first playoff win since January 1991.

Led by third-year head coach Zac Taylor, the Bengals finished the regular season with a 10-7 record to claim their first AFC North Division title since 2015. They made the playoffs in as the AFC’s fourth seed.

In 2021, Burrow set Bengals single-season passing records with 4,611 yards and 34 touchdowns, and his 108.3 passer rating ranked second in the NFL. The Louisiana State University Heisman Trophy winner was the No. 1 draft pick in 2020.

Burrow’s primary target, rookie wide receiver Ja’Marr Chase, ranked fourth in the NFL with 1,455 receiving yards, the most by a rookie in the Super Bowl era.

A Tennessee Titans win would be

Send the Titans to the conference championship game for the second time in three seasons (2019), the fourth time in the “Titans era” (since 1999) and the sixth time in franchise history.

Improved the franchise’s all-time playoff record to 18-22, including a 9-9 record with the Tennessee Titans (since 1999).

Give the Titans their first home playoff victory since a win over Pittsburgh in the Divisional Round on Jan. 11, 2003. Improve Mike Vrabel’s career record to 44-26 as a head coach, including the season regular and the playoffs.

Improve QB Ryan Tannehill’s combined starting record in the regular season and playoffs to 75-61, including a 33-15 record with the Titans.