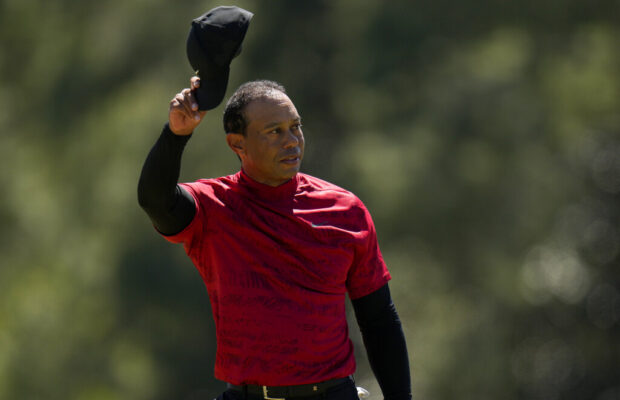 Tiger Woods heads to Southern Hill for PGA practice round

By DOUG FERGUSON AP Golf Writer
Tiger Woods flew to Oklahoma on Thursday for a practice round at Southern Hills, the first step in deciding if he can play in the PGA Championship.
The 18-hole walking practice round took place three weeks before the start of the PGA Championship to be held May 19-22 at Southern Hills in Tulsa.
A person familiar with his plans, speaking to The Associated Press on condition of anonymity because only Woods can authorize such information, the practice round confirmed.
Woods made a remarkable return to golf at the Masters after his Feb. 23, 2021, car accident outside Los Angeles broke his right leg and ankle bones. In his first competition and walking a course, he made the cut for the 22nd time in a row, although he tired over the weekend and his limp was more noticeable in the rounds when he shot 78 -78. He finished in 47th place out of the 52 players who made the cut.
Golf Channel reported that Southern Hills head pro Cary Cozby was caddying for Woods on Thursday. Tulsa television station KOTV showed an aerial view of Woods’ putting. He wore a black sleeve on his right leg.
Southern Hills last hosted a major tournament in 2007, when Woods won the PGA Championship for the second straight year and fourth time overall. That week he recorded his lowest score in a major, a 63 in the second round with a birdie putt that spun in and out of the cup on the final hole.
Woods has left Augusta National unsure of when he will play next, although he has confirmed he will be at the British Open at St. Andrews this summer.
He participated in the PGA Championship and the US Open at Brookline in June, although it was a formality as an exempt player.
Woods’ move was picked up by websites tracing his private plane from South Florida to Tulsa, Oklahoma, as well as a photo on Twitter showing the plane on the tarmac.
It didn’t generate the same buzz as when he traveled to Augusta National a week before the Masters, unsure then if he would play the first major of the year.
Southern Hills isn’t as strenuous a walk as Augusta National, except for the steep drop off the first and 10th tees and the inevitable climb back to the clubhouse, with only a slight rise in the process of road.
Although tired after the Masters, Woods could only imagine himself getting better.
“I don’t quite have the stamina that I would have liked to have, but a few weeks ago I didn’t even know if I was going to play in this event,” he said after the round. final at Augusta National.
“To move from there to here, we are excited about the prospects, training, getting into this gym and doing other things to strengthen my leg, which we weren’t able to do. because it took longer to heal.
Similar to the Masters, Woods likely won’t decide to play for the PGA Championship until this week.
___
More AP Golf: https://apnews.com/hub/golf and https://twitter.com/AP_Sports

The Braves reactivate Ronald Acuña from the injured list