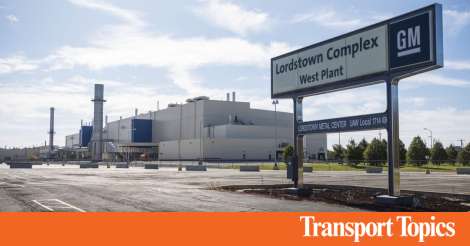 [Stay on top of transportation news: Get TTNews in your inbox.]

In a budget summary for the coming fiscal year, the administration said on February 10 that it wanted to eliminate the advanced-technology vehicle manufacturing loan program, which was established in 2007 to promote vehicle development. fuel efficient.

Lordstown Motors Corp., a new venture that is trying to reopen Lordstown GM’s former plant east of Cleveland to build electric trucks, is considering asking the loan fund for $ 200 million. He also gets a $ 40 million loan from GM.

But it is not yet clear whether the demise of the loan program would reduce Lordstown Motors’ money. There are still just over seven months left in the current budget year, and the program still has more than $ 17 billion to lend, according to the Department of Energy, which manages the program.

In part two of a two-part exploration of autonomous technology today, our latest RoadSigns podcast revisits conversations with Chuck Price of TuSimple and Ognen Stojanovski of Pronto.ai. Listen to them discuss an acceptable Level 2 version of independent trucking. Listen to a clip above and to hear the full episode, head over to RoadSigns.TTNews.com.

Lordstown Motors said on February 10 that it had yet to apply for the loan and that it was just one of many financing options being considered.

“We will factor this new information into our decision-making process, but our business model is self-sustaining without it,” the company said in a statement.

Lordstown Motors could still apply for a loan in the current fiscal year, the Energy Department said.

Eliminating the program could be problematic for President Donald Trump, who has campaigned to bring manufacturing jobs back to Ohio, a key state in his re-election campaign. Trump lambasted GM for plans to shut down the Lordstown plant, then praised the new electric truck company.

According to a summary of Trump’s budget plan, the administration wants to eliminate the loan and other program because the private sector should have a primary role in taking risks on new business ventures.

“The best use by the government of taxpayer funding is early stage R&D,” the document said.

U.S. Representative Tim Ryan, a Democrat who represents the region and has helped Lordstown Motors with the loan application, said he plans to speak with the administration and was optimistic that there is a way to ensure that the money is available.

“I don’t see why they wouldn’t want to be a part of this,” Ryan said on February 10. “It would be something we could work on together, and at the end of the day, it will lead to jobs with good pay and benefits.

These types of public-private partnerships, he said, are necessary to help create a new manufacturing economy and rebuild the middle class.

The advanced-technology vehicle manufacturing program began under the Obama administration with $ 25 billion, the Energy Department said. It loaned Ford Motor Co. $ 5.9 billion to modernize its factories to build efficient vehicles, and another $ 1.45 billion to Nissan Motor Co. to retrofit a plant in Tennessee to build electric vehicles. . Nissan paid off its loan, as did Tesla Inc., which secured $ 465 million to ramp up its Fremont, California plant.