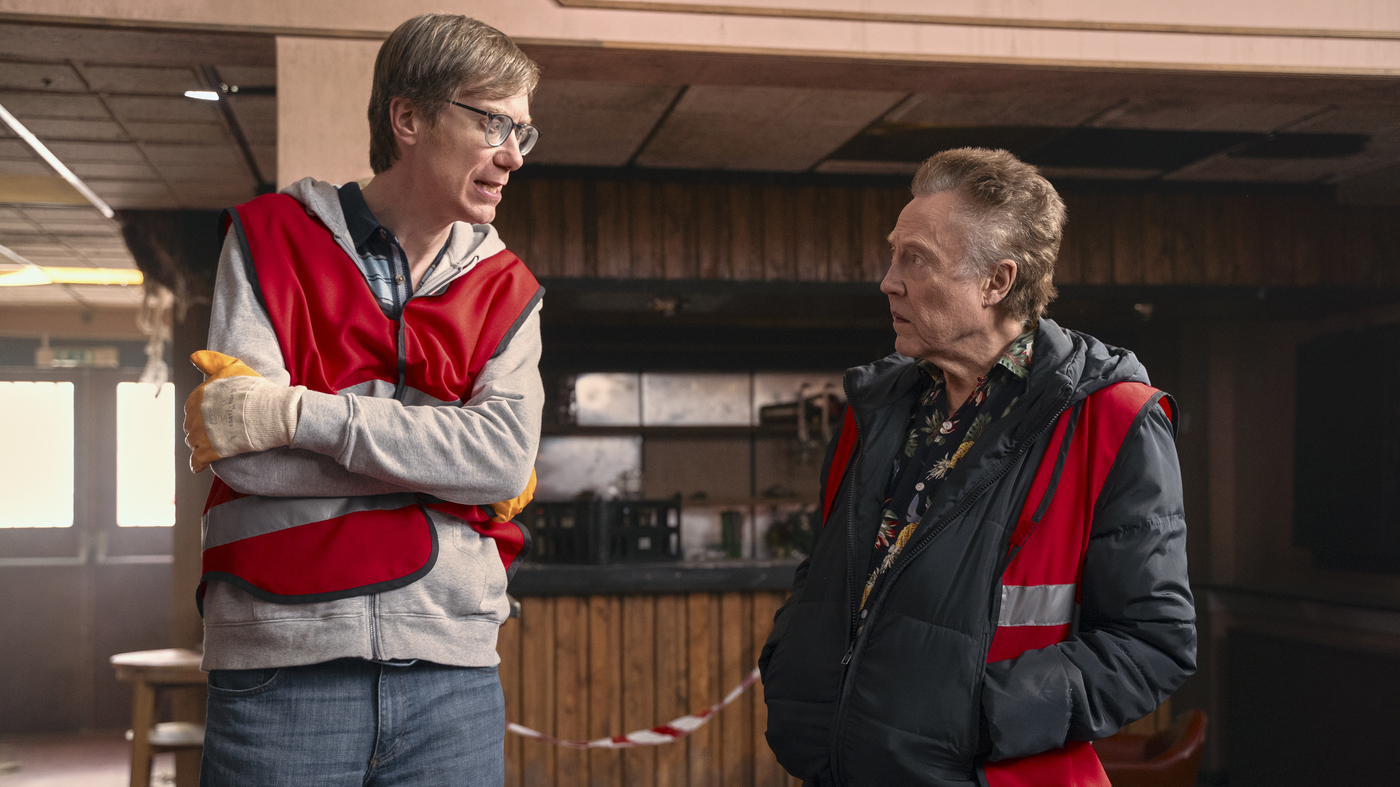 Stephen Merchant and Christopher Walken dress up for community service at Outlaws.

Stephen Merchant and Christopher Walken dress up for community service at Outlaws.

Stephen Merchant, best known for co-creating, with Ricky Gervais, the British comedy Office, has something about power.

“I am infinitely fascinated by [the] kind of people whose ego is corrupted, if you will, by a bit of power,” he says. “I think a lot of the ego is born out of insecurity. And I’m always interested in ‘What are the insecurities that people have that turn them into monsters?'”

The UK version of Office was a mockumentary that set the template for shows like Parks and recreation, modern family, Abbott Elementary School and, of course, the American version of Office. Now Merchant has a new show on Amazon Prime, called outlaws, following a group of low-level offenders who have been assigned to court-mandated community service. Merchant says the series was inspired in part by her parents, who oversaw community service in Bristol, England.

“My mom used to tell me about the kind of people who came through the door,” he says. “They were all so varied.”

An older offender, Merchant says, stole cabbages from people’s gardens – just so he could help out with the social aspect of community service each year. Another participant, whom Merchant calls “the laziest thief in the world”, was caught stealing the television from his neighbor’s house.

In the show, Merchant plays a hapless lawyer who was caught by the police in his car with a sex worker.

“I’m one of the creators, I could give myself a kind of James Bond [character]”, he jokes. Instead, he says, “I feel like I’ve branded myself again as some kind of awkward loser, which I’ve played many times before. “

On the mixture of humor and drama in his work

This juxtaposition, I guess, of tragedy and humor seems to me [like] my interpretation of the world.

My life, it had its dark moments and its tragic moments and it had humorous moments in the same breath. Simple things like, I remember going to my grandmother’s funeral and it was a very dark day. And yet, I’m in the hearse on the way to the cemetery and I hear the reverend and the driver discussing something through the glass. And the driver said, “Are you driving, Reverend?” And the reverend said, “No, I had to choose between drinking and driving, and I chose to drink.” And they started laughing. I just thought, well, sure, because it’s another day at the office for them. But for us it was a very sad and dark day. And this juxtaposition, I guess, of tragedy and humor seems to me [like] my interpretation of the world. And so to me, these side-by-side things seem completely normal, whereas, I think, to other people, they might seem shocking or incongruous.

On Casting Christopher Walken As A Petty Criminal On The Outlaws

I certainly think for a show set in the UK, the idea of ​​an American – even a single American – being in this world seems pretty glamorous, and that’s even more Christopher Walken. But the idea being that on the surface, [Walken’s character] looks mysterious and a kind of exotic. And then when you lift off below the surface, it’s just another petty criminal and a petty person, if you will. And the idea of ​​playing with that and the expectations that someone like Walken brings to the audience and undermines it…sounded very interesting. … [Walken] can be funny, but it can also be scary, but it can be sweet. …And, you know, Christopher has a lot in his arsenal.

Working with Ricky Gervais at a radio station, then later working together to develop the “mockumentary” format that characterized Office

I got a job at the BBC and… during a training exercise I was asked to do a documentary – a real documentary – about something in my neighborhood, you know, a hair salon Or other. And I said, ‘Well, could we make a fake one instead? My friend Ricky is very good. And we have some observations about life in the office.’ And they allowed me, and so I had a film crew for a day. And so Ricky and I went back to his old office and we kind of got a little taste of what became Office. And very quickly, we had this report both on the screen, on the radio and… in the writers’ room.

On the character of Gervais, David Brent, on the British version of Office

He is the intermediate manager par excellence. Back when the show was setting up, political correctness was a buzzword in the UK… and yet it wasn’t really internalized. It was some kind of act and whatever the old kind of prejudice [people] had [were] still persists. And for me, David Brent epitomizes that awkward transition. … [He’s] a suburban man who has his petty grievances and yearns for the adulation of his staff. He wants to be seen as a funny man, but also as a big boss. And suddenly, a documentary film crew has shown up at his office, and it gives him the opportunity to present a version of himself to the world. But there is a big gap between who he thinks he is and who he really is. And that was what was so delightful about this character.

My initial concern [American] series was that she was too close to our version, and she should kind of spread her wings more and be her own thing. And I think between seasons one and two, Steve Carell had his hit movie, The 40 year old virgin, and I think the network wanted to soften Michael Scott’s character a bit and make him a little more likable to the way Steve was in that movie. And I think that [executive producer] Greg [Daniels] very wisely agree with that. And they started moving it away from the slightly darker, more existential version of the UK version, and moving on to something a little friendlier. …

I think the British public is very used to making fun of rather small and mean-spirited men. And if it’s some kind of exorcism for us or something like that, I don’t know. And I think I’m not sure the tradition is quite the same in the United States. I think maybe you value winners more than we do.

By gravitating towards socially awkward comedy, in part because he is very tall (6ft, 7in)

I have always been taller than everyone. And that made me quite embarrassed. … You wish you could go back and talk to your younger self with the knowledge that you have now, and the knowledge that I have now is that people want to be great. People dream of being great. And for some reason, I didn’t realize it. … I felt very uncomfortable because I was taller than everyone else and I should have leaned on that like a superpower. And instead, it made me quite embarrassed. …

It’s also simple things, like not being able to buy clothes very easily, and so many conventions of youth – hanging out with your friends and shopping for clothes – it’s like it’s just kinda cut for me because unless they were all going to come to the Big & Tall store, I wasn’t going to find clothes that fit me. And so you can’t style. You cannot create a look for yourself. You can’t choose to be a rocker or whatever, because you can’t find the clothes that fit you. So you end up wearing what fits and you never quite walk around feeling like you own yourself.

On his advice for writing a TV series

Someone told me early in my writing career, with a comedy or with a drama, you take your characters, you chase them up a tree and then you throw rocks at them.

Someone told me early in my writing career, with a comedy or with a drama, you take your characters, you chase them up a tree and then you throw rocks at them. And so season 1 [of The Outlaws] chased them up the tree. Season 2 really throws rocks at them and heats up the temperature beneath them. And it was very nice, because you created a world and you can have a lot of fun with the characters and see the consequences of their actions. And I’m very happy and we’ve already started talking about a third season as well.

Lauren Krenzel and Joel Wolfram produced and edited this interview for broadcast. Bridget Bentz, Molly Seavy-Nesper and Natalie Escobar adapted it for the web.