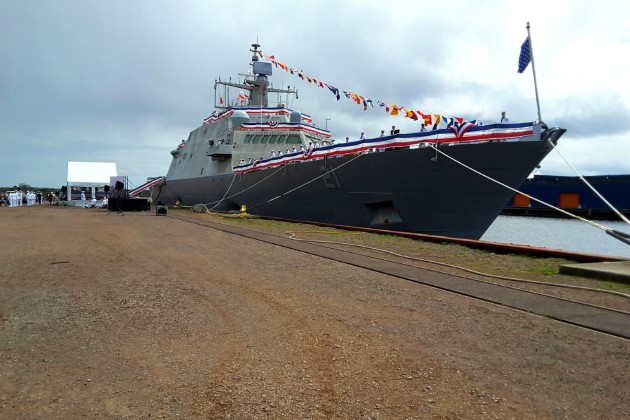 (KNSI) – History was made in Duluth on Saturday as the littoral combat ship USS Minneapolis-St. Paul was officially commissioned and entered service.

On a cool, rainy Saturday, a few hundred people, including Navy veterans and their families, lawmakers and the ship’s crew, gathered at the Duluth Seaway Port Authority to put the USS Minneapolis-St . Paul on duty. Former Deputy Assistant Secretary of the Navy, Jodi Greene, the ship’s sponsor, gave a rousing speech saying, “As crew, you have already proven your strength and determination to prepare for this momentous day. . You prepared this ship to take its place in the fleet in difficult times. All eyes were on you as you continued to blaze this trail.

Greene then ordered from the platform: “Pilot our ship and bring it back to life.” As “Anchors Aweigh” was played by the Navy Band Great Lakes, the men and women of LCS-121 raced aboard, jogging through the cheering and cheering crowd.

Built by Lockheed Martin and Fincantieri Marinette Marine in Marinette, Wisconsin. Minneapolis-Saint Paul was launched and christened on June 15, 2019. A design propulsion failure delayed her entry into service, and after the ship completed acceptance trials on August 21, 2020, she was delivered to the ‘US Navy on November 18, 2021.

The LCS-121 is a fast, agile, mission-focused platform designed to operate in coastal environments while also being capable of operating in the open ocean. With a top speed of 40 knots or 46 miles per hour, it is designed to defeat asymmetric “anti-access” threats and can support forward presence, maritime security, maritime control and deterrence.

Minneapolis-Saint Paul will be based at Naval Station Mayport, Florida.

Copyright 2022 Leighton Enterprises, Inc. All rights reserved. This material may not be broadcast, published, redistributed or rewritten in any way without consent.