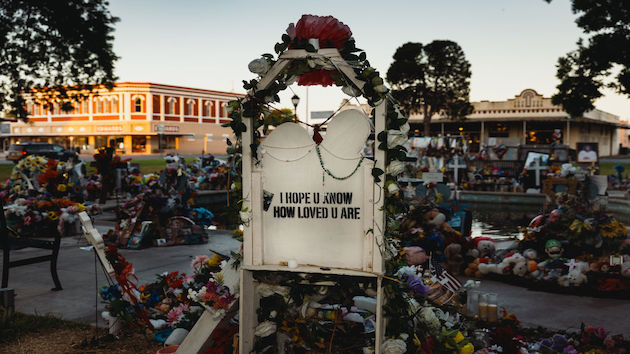 (UVALDE, Texas) – The district attorney investigating the May 24 massacre that killed two teachers and 19 students in Uvalde, Texas, revealed Friday that she met with the families of the victims to brief them on the investigation in Classes.

“We’re trying to make sure they get the resources they need,” District Attorney Christina Mitchell Busbee, Uvalde’s lead prosecutor, said in an interview at her downtown office. “And then I tell them where I am in the investigation, and so those conversations continued.”

Busbee declined to tell ABC News which families she spoke with and did not provide an update on the shooting investigation. His comments came the day after some members of the public shredded the prosecutor and other leaders for keeping them in the dark about the ongoing investigation into the Robb Elementary School shooting.

Police say the shooter was killed by law enforcement, but the ongoing investigation is examining, among other things, any communications the killer may have had prior to the massacre and the sloppy police response which, according to the authorities, did not follow the correct procedures by waiting more than an hour to stop the rampage.

Complaints about Busbee and other agencies were sometimes heated at a special meeting of the city council on Thursday evening.

“Come here, show your face,” said Tina Quintanilla-Taylor, whose daughter survived the shooting. “We show our face here because we have lost someone or someone is suffering. Enough is enough.”

“Nobody should have a lot of power,” Irma Garcia’s sister, Velma Lisa Duran, said of the district attorney during the meeting.

In response to the victims’ families’ accusation that she is covering up for police who are currently under investigation for their response to the shooting, Busbee told ABC News that she will release a statement “at some point given”.

As she continued during the interview, Busbee said, “I hope everyone in this community knows that if…” then she stopped for fear she was about to say some too.

“I’m going to stop there because I’m getting to the things that I’m going to put in a written statement at some point,” Busbee added.

The families complained that the district attorney dodged their questions and refused to release evidence, including 911 calls and surveillance footage. During the council meeting, Uvalde Mayor Don McLaughlin showed a letter from Busbee, explaining that the DA had formally requested city officials that “any release of material about this incident at this time would interfere with said ongoing investigation”.

“Any questions regarding body camera videos and other Robb Elementary School investigative records should be directed to the Uvalde County District Attorney and the Texas Department of Public Safety/Texas Rangers,” McLaughlin said in a statement. a statement released last week.

“Anyone who suggests that the city of Uvalde withholds information without legitimate and legal reasons is wrong and spreading misinformation,” the statement said. “There are specific legal reasons why the City cannot release information at this time.”

Busbee declined to say whether McLaughlin had been informed of the investigation.

Uvalde: 365 is an ABC News continuing series reported from Uvalde and focused on the Texas community and how it continues in the shadow of tragedy.