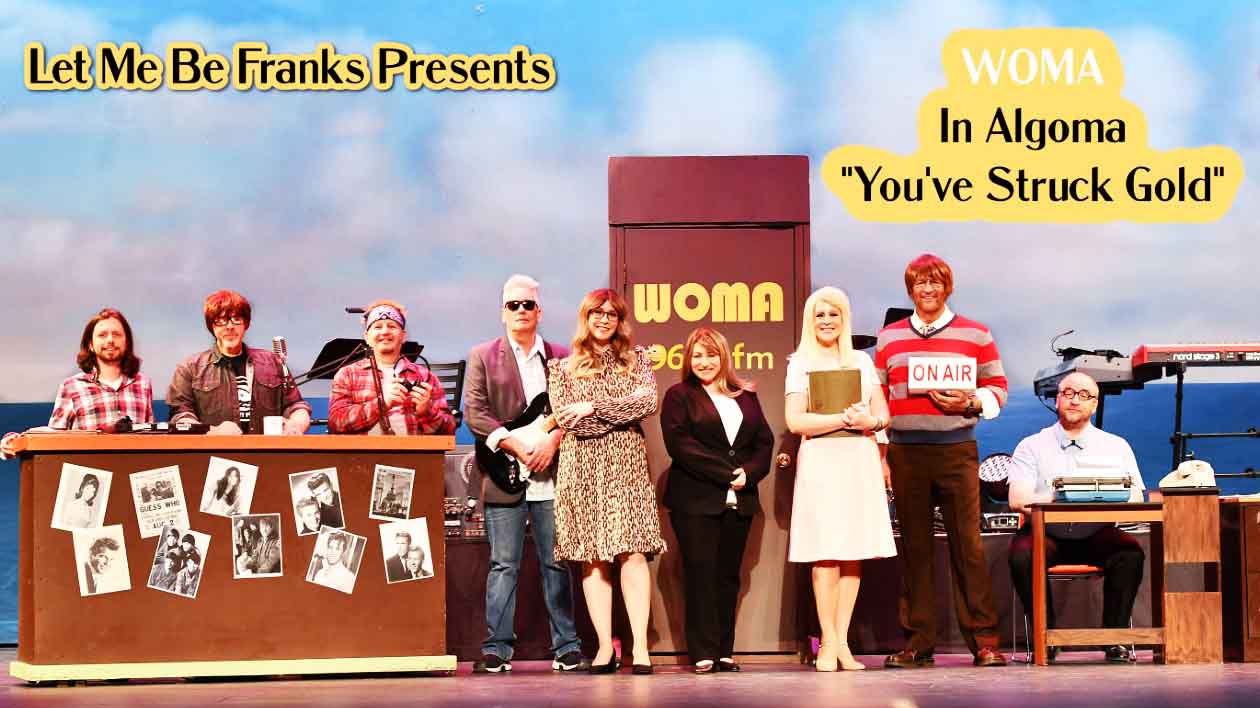 GREEN BAY, Wis. (WFRV) – A Green Bay TV presenter became a radio owner and along the way bought a station from a disc jockey/owner who later turned to the ministry.

Thirty-seven years later, it has become the story of a musical by a troupe that creates such shows and whose namesake attends the church of the former disc jockey/owner.

The show’s title is inspired by how the station identified itself on the air, “WOMA Algoma, You’ve Struck Gold”, when it featured hit songs from the 1960s and 1970s.

The show’s characters are the people who worked at the station on-air and behind the scenes – all of whom sing in the show troupe musical Let Me Be Frank Productions.

In keeping with all of Frank’s shows about the people and places around these regions, facts and history are fractured – to add bits of humor and fun to lead into the next song, sung in an often golden way with a band adding to the musical veneer.

This time, co-writers/directors Frank Hermans and Pat Hibbard cook up stuff about fish falling from the sky during Algoma’s Shanty Days festivities and a news director who believes in imaginary walls and doors and three female workers who sing the theme song. of the station in perfect harmony at the drop of the hat.

This is all because Reverend Dale Eggert is a minister at Faith United Methodist Church in Brillion and parishioners include show business Frank Hermans and his wife, Amy Riemer.

“He’s my pastor,” says Frank Hermans to introduce the show in which he plays Dale Eggert when WOMA was sold to former WLUK-TV presenter Ray Wheeler.

It’s quite the backstory to a show filled with hits from the golden age of popular songwriting.

A duet, “The Closer I Get to You,” sung vividly and with layers of meaning by Amy Riemer and Frank Hermans, is particularly striking.

It follows a brilliant sequence that only Frank’s can do because he can: Six sister band songs sung one after the other by singers matching the style of a song. In turn, Sarah Galati for the Everly Brothers, Frank Hermans for the Allman Brothers, Lisa Borley for the Doobie Brothers, Tom Verbrick for The Righteous Brothers, Amy Riemer for The Isley Brothers and Pat Hibbard for The Chambers Brothers. And the group prepared the colorful plate for all.

Frank’s singers have a way of performing songs to blend their vocal style with their character’s situation – not duplicating but adapting.

Tom Verbrick has two voices in this show. One is gritty/cheesy as a reporter, and the other is from the bottom, like in “King of the Road”.

Frank Hermans is versatile as always, with “Take Good Care of My Baby” as the story’s culminating song as Dale Eggert says goodbye to his station.

Amy Riemer has mastered the art of embracing an R&B/soul sound like in “On Broadway.”

Pat Hibbard is the rock guy with a kind of joy in the muscle of songs like “It’s My Life”, while adding layers with his bass guitar playing.

Lisa Borley is the person on the rise, sparking the likes of “Shame” and “Band of Gold.”

Sarah Galati is an actress-singer who deals in person like in “Nobody Does It Better” by Carly Simon.

And there are the moments when the singers take a step back to admire what Dennis Panneck is exploring on guitar, Tony Pilz is letting loose on keyboards and Andrew Klaus is launching on drums.

And this time it’s all because a guy who bought an early FM radio station felt a different appeal. Well, that’s showbiz, I guess.

+ “I’ll Never Find You Another” (The Seekers) – Sarah Galati

“What A Fool Believes” (The Doobie Brothers) – Lisa Borley

“(You Are My) Soul and Inspiration” (The Righteous Brothers) – Tom Verbrick

“The Time Has Come Today” (The Chambers Brothers) – Pat Hibbard

+ “Cool Jerk” (The Capitols) – Sarah Galati and all

+ “Nobody does it better” (Carly Simon) – Sarah Galati

FOLLOWING: “Baxter’s Where Everybody Knows Your Name,” starting June 10.

THE PLACE: Stop and look around. The auditorium of the Meyer Theater is full of it. Located at 117 S. Washington St. in downtown Green Bay, the Meyer is one of the state’s colorful historic theaters. In its current form, the Robert T. Meyer Theater opened on February 27, 2002. It seats approximately 1,000 people. The building is much older. It opened on February 14, 1930, as one of Fox’s lavish cinemas. The place is picturesque. The inner aura of the theater was its saving grace towards the end of the 20th century, when the building faced an uncertain fate. The architectural/decorative style is defined as Spanish Atmospheric. The auditorium is designed in the style of an ancient Moorish court. The eclectic mix of architectural styles and colors can be found throughout the halls.

THE PEOPLE: Robert Meyer was president and CEO of Tape Inc. of Green Bay. The theater took its name at the request of his wife, Betty (Janet Elizabeth) Rose Meyer, whose financial contribution at a crucial time helped revitalize the building. The Rose family has a history of deep commitment and involvement in the welfare of Green Bay. Robert Meyer died in 1984, Betty Rose Meyer in 2008.

Milder weather on Saturday; chance of rain Sunday afternoon, with snowflakes in some areas